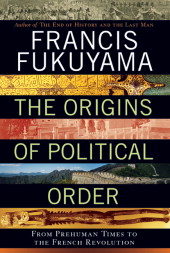 Francis Fukuyama likes his subject matter epochal. His best known book is The End of History and the Last Man (1992). His taste for big subjects comes from being a Hegelian, which is a hard way to earn a living these days. In fact, his latest book, The Origins of Political Order, is a job application to become a Darwinian. The book traces the growth of states from “prehuman times” to the French Revolution, which, as it happens, was Hegel’s .

Fukuyama still regards history as a grand narrative of progression to one giant liberal republic, as Hegel did. The main difference in this new book is that Fukuyama sees England as the ideal liberal republic, and its formation as a lot more accidental and messy than a neat Hegelaian macronarrative. For example, the Roman Empire had nothing to do with the emergence of the English state. Fukuyama doesn’t mention the Romans at all, although he manages to work the tax system of rural France into his argument.

Even perfectly ordered England, however, has its problems. For Darwin, individuals are fiercely self-interested. The state and other higher forms of rationalized social order are illusionary edifaces masking the roiling competition on the ground. Religion was an early device for forging a social order. Fukuyama writesm “If I believe that the chief can command the spirits of dead ancestors to reward or punish me, I will be much more likely to respect his word.”

Fukuyama is already at work on a sequel to The Origins of Political Order. He seems to be preparing us for a messy end. In 1806 Hegel could see the germ of a liberal state coming into being. It seemed plausible that liberalism would spread throughout the world. In 2011, however, England can’t question a media mogul without disruption. Journalistic principles are a cover for ruthless competition between tabloids. I wouldn’t be surprised if The Origins of Political Order Part 2 ends with a very different exemplary state: Iraq.