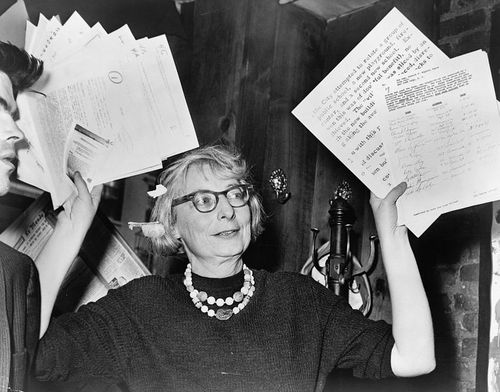 Jane Jacobs towers over the discipline of city planning circles so much there’s a saying: WWJD? Or, what would Jane do? Like most questions of this type, the answer tends to have more to do with the person asking the question than the authority whose name is invoked. As Max Page, the co-editor (with Timothy Mennel) of Reconsidering Jane Jacobs, writes in his introduction, the name Jane Jacobs is a “shorthand for a set of ideas and planning practices that have spread around the world over the past half century, some of which the individual named Jane Jacobs might not have recognized as her own.”

If it’s not always clear what Jane Jacobs would do, it’s certainly clear what she was: a writer. Never formally trained as an urban planner, she called herself a writer. She may have the reputation as an intrepid protester against Robert Moses and other proponents of the bulldozers-and-towers brand of urban renewal in the post-World War II era, but she actually spent most of her time locked away in her writing studio producing Death and Life of Great American Cities, The Economy of Cities, and other books on urban planning. Jamin Creed Rowan, cites several examples of Jacobs’ jaunty, unacademic style. No city planner had ever used terms like “heart-of-the-day ballet” and “hop-and-skip relationships” before her, and none have since.

Her identity as a writer both helped and hurt her in urban planning circles. She began her career as an enterprising, pipe-smoking reporter for Iron Age, a metals industry trade magazine. She was fired when her interests strayed too far from iron matters, and she reinvented herself as an architectural writer as a staff writer for Architectural Forum. There she learned to write for both a professional and general audience. She grabbed her reader’s attention with wordplay (“galloping gangrene”), slang (“hoohaw”), and vivid images (Washington, D.C. had a “choked downtown, haphazard suburban sprawl, blight at the heart”).

Jacobs’ store of tropes was much larger than her empirical evidence, leaving her vulnerable to charges that she regarded the whole world as one big Greenwich Village. Nevertheless, despite the anecdotal style of Death and Life and her “magpie” mind, Jacobs was a sophisticated and systematic thinker about urban issues, as Richard Harris demonstrates. Her one theoretical weak point was her insistent belief that human behavior was shaped by environment, a determinism shared by some New Urbanist planners as well. Jill L. Grant points out that technological changes to the city have changed its social relations in ways Jacobs never accounted for. The “heart-of-the-day ballet” doesn’t occur so much when it’s 95 degrees out and everyone takes refuge in air conditioning.

Reconsidering Jane Jacobs has two types of essays: critical essays from professionals in the field and dispatches from cities around the world about her influence. Some of the most interesting critiques of Jacobs come from the dispatches as her ideas are tried out in actual urban conditions. Gert-Jan Hospers says the Dutch are avid readers of Jacobs, while Sergio Kiernan complains his fellow porteños in Buenos Aires don’t read her much at all—and have nearly ruined their city as a result.

Perhaps the most interesting of these dispatches comes from Nathan Cherry, reporting from the instant cities of China. Jacobs’ subject was the twentieth-century city, with its nineteenth-century core and automobile age fringes. Chinese cities such as Shenzhen and Guangzhou are more like early industrial age boom cities. Since 1980 Shenzhen has increased in size 10,000 fold. New blocks are constructed faster than one can walk down them. At first glance, parts of Guangzhou are perfect examples of Jacobs-style urbanism: pedestrian-centric streets (they’re six to fifteen feet wide) with medium-density housing (six-story walkup apartments housing recent migrants from the countryside and, occasionally, their chickens), and small shops and businesses (catfish inventories stored in the gutters, a sidewalk dentist). Cherry has been commissioned to create a new community for 10,000 residents designed according to Jacobs’ principles. Cherry reports, with frank irony, that the project has “close to 100 percent signoff” from residents. He attributes the consensus to a desire for a better living environment and “yes, a bit of government-imposed fear as well.” The twenty-first century city still has a lot to learn from Jane Jacobs, but it needs a bit of Robert Moses as well.

Jane Jacobs isn’t just the anti-Moses or the tart-tongued advocate for walkable cities. Too much of her work is shrouded in myth. Her ideas about the city are too valuable to leave there. That’s why Page and Mennel’s volume of essays is a valuable corrective to narrow and polemical invocations of WWJD. Page and Mennel show there’s not just one Jane Jacobs, but many.