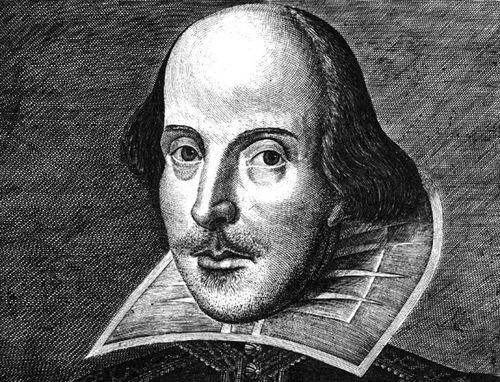 I’m currently reading (and enjoying) Arthur Phillips’ The Tragedy of Arthur, which is about, among other things, an obsession with Shakespeare. Recently in the Paris Review Phillips chatted with Stephen Marche, author of How Shakespeare Changed Everything, on the subject of Shakespeare idolatry. Their exchange reveals how beguiling Shakespeare can be, as well as why it’s a bad idea to succumb totally to his magic.

One example of Shakespeare madness: a South African archeologist named Francis Thackeray (presumably his real name) wants to dig up Sahkespeare’s body to find out if he smoked pot. Phillips and Marche are willing to believe that the Bard smoked pot–why not?–but even that factoid wouldn’t get us any closer to Shakespeare, which is all we want. Indeed, you can assemble everything we know or think we know about Shakespeare, bad and good, and he would still appear to come out of nowhere. Phillips writes,

Take all the pot-smoking Catholic homosexual wife-abandoning illiterate-daughter-raising people you know. We have gotten no closer to him. Writers come in many varieties. The degree to which their lives infect their works, the degree to which their day-to-day personalities are visible in their works: this is a spectrum. But it seems evident to me that whatever new biograpicho-scandalous tidbits we scrape up, they don’t seem to show us the guy writing the plays.

But they can be dangerous as well, especially when one is young and susceptible–and in most need of guidance. If I hadn’t read Walter Benjamin during my formative years, I’d be a rich lawyer by now.