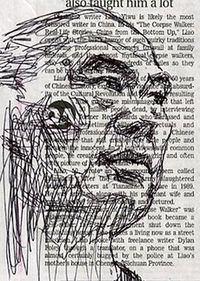 The New York Review of Books talks to the Chinese poet and writer Liao Yiwu about his new book, God is Red: The Secret Story of How Christianity Survived and Flourished in Communist China, which will be published in the United States in September. The Chinese government condemned the book as an “illegal cultural product,” so last month Liao slipped across the border into Vietnam, eventually ending up in Berlin. Liao knows if he returns to China he will be imprisoned. His 2008 book, The Corpse Walker: Real Life Stories, China From the Bottom Up, landed him in prison, where he was beaten so severely he tried to commit suicide by bashing his head against a wall. (More experienced prisoners recommended using a wall with a nail.)

Despite the clearly provocative subject matter of his books, Liao insists he’s not a political writer and he seems a bit bewildered by the attention he’s been getting from the government. “My writing is illegal,” he tells Ian Johnson. “I don’t know. I’m just writing something and now have broken their law. I don’t want to break their laws. I am not interested in them and wish they weren’t interested in me.”

It’s interesting that Liao has taken refuge in East Berlin. Liao says it reminds him of China; he’s even conducted a comparative study of Chinese and German prostitutes. Dissendent writers from the Eastern Bloc had a kind of glamor to them, at least in the eyes of Western observers who envied the dangerous qualities of their writings, if not the dangerous aspects of their lives. Chinese dissendent writers and artists like Liao, Liu Xiaobo and Ai Weiwei are the last of the breed–thank God.