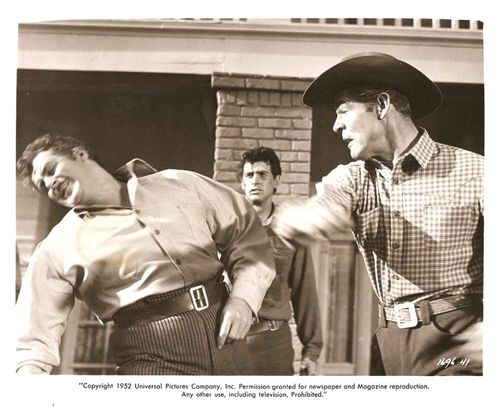 Do you know what the term mise-en-scene means?

It’s a basic term in film studies–so basic and pervasive that its meaning has gotten rather fuzzy. Glenn Kenny tries to clarify the term, but ends up making it too complicated, although his discussion is worth reading in full.

His blog entry was prompted by an experience familiar to anyone who regularly attends film festivals: an indecipherable soundtrack during a screening of Horizons West (1952) as part the Robert Ryan retrospective at the Film Forum. The incomprehensible dialog forced Kenny to focus on director Budd Boetticher’s filmmaking technique.

Boetticher isn’t a stylist by any means. Kenny calls his visual style “elemental and elementary.” During the production of Horizons West Boetticher was working for Universal, at that time a B-movie studio in the habit of cutting corners on production values and shooting schedules. Kenny guesses, probably correctly, that Boetticher and his cinematographer, Charles P. Boyle, knew they only had a certain number of setups to get them through a scene, so they had to plan carefully.

In the 1950s, a setup consisted of positioning a single camera, then placing the actors and props in front of it. (Mise means “to place.”) The lighting has to be adjusted, the focus set, and any camera movement enabled. It is exactly like setting up a scene for a photograph. Film differs from photography in one sense in that a film camera can move–pan, track, tilt, zoom in, whatever. All of these elements together make up mise-en-scene.

Kenny has an excellent discussion of the poker game scene in Horizons West in which Boetticher had to capture the players’ emotional development.

A quite beautiful example comes in a poker game that Ryan’s character joins with Raymond Burr, playing a ruthless cattle baron whom Ryan eventually turns the tables on. The dealing and raising is shown via a couple of angles around the table; then, as Julie Adams, playing Burr’s wife and, natch, a frustrating love object of Ryan’s, walks in to the scene the camera settles on a simple straight-ahead medium shot of the three characters. And then something is said that slightly provokes Burr. The next setup is of a medium close-up of Burr, looking irritated. I infer that in shooting this scene, Boetticher knew that he had a limited number of setups he could execute, and in the approach to the terminus to the scene, every setup had to count. And so, while the editors cut away once or twice from the medium closeup of Burr back to the “master,” Boetticher and Burr pack a lot of “action” into that medium closeup, including Burr giving a menacing squeeze of Adams’ arm.

Boetticher stitched together the setups by editing them together into a scene, which in turn is combined with other scenes, again through editing, to make up a whole film. Editing is another way the cinema differs from photography. It’s no oversimplification to say that until filmmakers discovered editing, cinema didn’t exist.

It’s as simple as this: All film technique can be classified in two ways: mise-en-scene and editing. The former is everything within the frame of the film. The latter is how the shots are connected to each other. You can even assign directors to one technique or another. Mise-en-scene directors: John Ford, Michelangelo Antonioni, Richard Linklater. Editing directors: Sergei Eisenstein, Jean-Luc Godard, David Fincher. The distinction isn’t always useful–Boetticher doesn’t do anything distinctive in either realm–but it’s a handy first step in understanding a filmmaker’s technique.