First, I have sad news to report: film director Raúl Ruiz has died. I recently saw Mysteries of Lisbon (2010) and liked it very much. Ruiz bucks the recent trend toward highly energized historical dramas–lots of stylishly disheveled men and women dashing from room to room hoisting enormous skirts. In Mysteries Ruiz lets his actors take their time, and at times the acting can seem overly mannered. But Ruiz casts a skeptical eye on Europe between the French revolution and the 1848 uprisings. For all revolutionary fervor of the period, ancient class distinctions remained firmly in effect. The Notebook has a good overview of Ruiz’s career.

Over at AGNI Online Vincent Czyz argues in “Plotting Against Plot” that the most memorable aspects of a novel are images, scenes, well-turned phrases. Plots, he says, are secondary to the pleasure of reading.

When I think of Moby-Dick, for example, the first thing that comes to mind has nothing to do with the narrative; the first thing that comes to mind is the tone of the novel, the mood Melville created. The book returns in fragments. I remember the tenor if not the actual words of Ahab’s one-sided conversation with the severed head of a sperm whale although, yes, a few lines do put in verbatim appearances (Of all divers, thou has dived the deepest. Tell us that secret thing that is in thee.). I remember Melville’s poetic meditation on the whiteness of the whale (herein you’ll find the rudiments of Jung’s theory of a collective unconscious). I remember the cook’s speech to the sharks, in which he theorizes that an angel is nothing but a shark well-governed; I remember Ahab categorizing all visible objects as mere pasteboard masks and swearing his men to abet him in his hunt for Moby-Dick (recalling Milton’s arch-rebel, exiled to darkness visible, exhorting his fellow angels to take revenge on heaven).

Who remembers the plot of Moby-Dick? 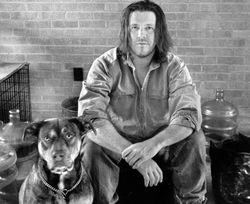 Maud Newton has a piece in the New York Times Magazine (way to go, Maud!) on David Foster Wallace’s influence on contemporary essay writing. Wallace’s essay-writing style is full of qualifications and colloquialisms, rhetorical strategy that replaces authority with sincerity. Typical of his style is the essay 1993 “E Unibus Pluram: Television and U.S. Fiction.” Newton writes,

In its soaring romanticism, its Orwellian fears, its I’m-just-riffing-here backtracking and its infuriating absence of question marks following interrogatories, this essay prefigures many of the worst tendencies of the Internet. As the Times critic A. O. Scott has observed, Wallace “wants to be at once earnest and ironical, sensitive and cerebral, lisible and scriptible, R&D and R&R, straight man and clown, grifter and mark.” Every assertion, consequently, comes wrapped in qualifications, if not partial refutations; a later essay, appearing in “Consider the Lobster,” is titled, “Certainly the End of Something or Other, One Would Sort of Have to Think.” 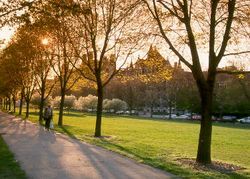 In the second installment of n+1 magazine’s City by City series, Sam Biederman recalls the six houses in which he grew up–all located within a few blocks of each other in Hyde Park, the South Side neighborhood where the University of Chicago is located. He grew up during the 1980s, when the university reconciled itself to its location, a neglected, impoverished neighborhood isolated from the more affluent areas of the city. Biederman’s essay is both an urban and personal history of what used to be called urban pioneers. His middle class family (his father was an attorney) remained loyal to Hyde Park when all the signals told them to move to the suburbs. Writing about the family’s first house, Biederman recalls,

5522 S. Harper was on the walking route of Throckmorton who, without being too old-fashioned about it, was the local madman. He walked by our front door every morning around sunrise, carrying a freshly bloodied handkerchief and a closed umbrella, held upright. Hyde Park was full of homeless people, panhandlers, and familiar drug addicts who would scream at you as you walked past them on the street. (My father blamed their presence on the University of Chicago students, who tolerated and supported them with handouts.) But Throckmorton was distinct. Before he had lost his mind, he had been a scientist at the university. Before you saw him you could hear him coming, singing his song: “Hey loser, loser, loser, sexy, sexy, sexy, looo-serrrrr, looser!”