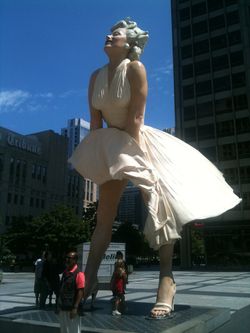 It doesn’t matter who you are, when you approach The Seven Year Itch, a statue of Marilyn Monroe recently unveiled in a corporate plaza in downtown Chicago, you feel compelled to look up her skirt.

Artist Seward Johnson has perfectly reproduced the scopic drive of the cinema: the insatiable desire to see more. Beyond that, however, things get a bit murkier. The statue is either a crowd-pleasing piece of public art or a kitschy pile of tourist bait. When I approached it on a sunny weekday, quite a crowd had gathered around it. A boy of about ten years old posed for a photograph by wrapping his leg around her calf. It feels a little churlish to deny the audience its pleasure, especially when so few public works of art inspire such immediate affection–and lust.

No crowds like this ever gathered around Joan Miró’s Chicago, suggesting The Seven Year Itch has a chance to become an iconic artwork here. More likely, however, is that the statue will become the Hard Rock Cafe of public artworks. The Seven Year Itch is eye-catching, fun, accessible, even well made. It also looks like something that will end up in a garage sale.

Part of the problem is that it’s so big–twenty-six feet tall. The Seven Year Itch is a monumental public sculpture on a scale once reserved for slain leaders and generals on horseback. In this way Johnson’s statue resembles the newly unveiled statue of Dr. Martin Luther King, Jr. in Washington, DC. The King memorial is also highly figurative and bigger than it really needs to be. However, the King memorial, like the others around the Tidal Basin, refers to a national historical narrative. They invite mediations on critical moments in American history. In this way, they are inexhaustible. The Monroe statue in Chicago, on the other hand, refers to a fleeting memory, a privatized experience with no larger meaning.

It’s interesting to note that we never see Monroe’s entire body in the famous subway breeze scene. Most of the scene is shot from the waist up. We get Tom Ewell’s frankly admiring gaze and Monroe’s oddly distracted gaze off camera. The subway passes twice: once to surprise us, a second time to assure us that the first incident was real. After that, there’s a chaste kiss, and that’s it. We’re left with wanting to see more, not necessarily to see again. The Seven Year Itch on Michigan Avenue offers the same experience, and nothing more.

The panties are white lace. And yes, I looked twice, then moved on.