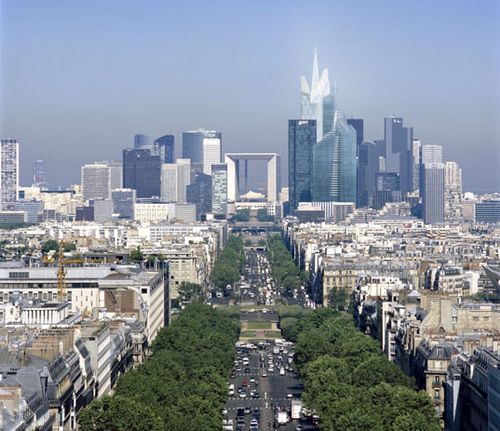 Living and working in Chicago, one takes skyscrapers for granted. The only two indigenous forms of architecture here are the skyscraper and the bungalow. It’s easy to forget, then, how controversial high rises have been. Le Corbusier dismissed them as “adolescents of the machine age,” misshapen freaks menacing pedestrians. Rem Koolhaas described the skyscrapers of Manhattan as phantasmagoric husks. The skyline is “a system of solitudes,” while the majestic Empire State Building “can have no content. The building is sheer envelope.”

Corbusier and Koolhaas doubted the conceptual sustainability of skyscrapers. The questions they raised persist in debates about the shape of the twenty-first century city. Resource conservation is the most obvious question raised about high rises. They consume an enormous amount of energy, expending as much as 10 to 15 percent of it just moving people from floor to floor.

the question of energy consumption – for promoters as well as detractors – is not the primary topic of debate. The issues are instead more nuanced, including the “embodied energy” of the materials used in construction, the life of the building as well as the need for future rehabilitation and the proximity to urban amenities.

New skyscrapers are constructed from recycled materials and feature software systems that shuffle elevators so they can maximize the number of passengers. The recently completed Bank of America Tower at One Bryant Park has an awkward name and a LEED-Platinum designation. Even typewriter-era structures like the Empire State Building are more efficient, on a per square foot basis, than a suburban McMansion with an Escalade in the garage.

Bank of America Tower at One Bryant Park from Cook+Fox Architects on Vimeo.

Even the most virtuous skyscraper has trouble with the sidewalks around it. The Bank of America Tower at One Bryant Park has wooden door handles, as if it were a barn. However, spend too much time admiring its glass curtain walls and feeling up its leather-clad elevator lobbies and you will have to answer some pointed questions from a security guard in a bad suit. Pedestrians are welcome, flâneurs are not.

All the arguments against skyscrapers run aground, though, on the issue of density. Edward Glaeser has pointed out that Greenwich Village was preserved at the cost of ugly residential slabs elsewhere in Manhattan. Last Sunday Ryan Avent argued in The New York Times that San Francisco will never get another Vietnamese restaurant unless it allows more high-rise residential structures.

Even Paris has skyscrapers, although it won’t admit it. Chicago can’t have enough of them. Both cities know they will ossify without regular infusions of new residents. How they accommodate density by erecting skyscrapers–either crammed into the middle of the city or placed tidily on the outskirts–will be determined by cultural and historical conditions on the ground. No matter where you live or work, there will be one constant: the elevators are going to get a lot more crowded.