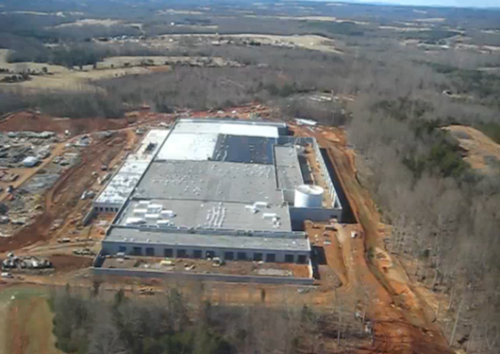 Data centers are among the most important structures in the Internet age, and the least interesting to look at. Routers and servers are zero design objects. They have no interfaces. They can’t be operated upon directly except to switch them on and off. They are pure process, pure spirit. They are the monks of the computer world.

Data centers are monastic places stripped of all identifying markers to cut them off from the temptations of the analogue world. Apple’s new data center–soon to be home to your iCloud data–is a giant Mac Mini stashed in a North Carolina forest (above). The color of your front door is stored in the Googleplex, but good luck finding the front door of a Google data center.

James Bridle of the blog booktwo.org reports on a new trend in data center design away from the enigmatic box tradition. Newer data centers have exteriors that express the beauty of the  Bridle quotes architect Iain McDonald, “You could design a datacenter and, depending what you clad it in, you might be hard pushed to see it as that different from an art gallery.” McDonald cites William Gibson’s novel Pattern Recognition as an influence.

Having the exterior express the activities of the interior is a shibboleth of Modernist architecture, and architects have been struggling to come up with appropriate metaphors for our networked world, so it makes sense that data centers would be an attractive venue for designers. However, part of the meaning of the cloud metaphor for computing is that it doesn’t matter where your data is. An expressive James Bond-style data center only reminds us of something we’re just learning to forget: that data has a location and, therefore, a vulnerability. The developers I work with will joke about how they don’t know the physical location of the servers on which their code works. They don’t even know which continent they’re on. They don’t really want to know. They’ve only laid eyes on one server, a Mac Mini perched, like a sparrow, on a stack of brawny Windows servers a couple of floors below where we sit. Consequently, this server is regarded with suspicion even though it fails no more often than the servers in Spain (at least the people who administer them are in Spain).

The beautiful new data centers remind us of the corporeality of the Internet, which is instructive, I suppose. And they present branding opportunities for global corporations, which masks the actual tedium experienced within. But we want the storage, securing and retrieval of data to be hidden from us. Most of our truly critical data isn’t stored on our personal hardware anyway. We just want our data in front of us the instant we summon it. Once the hardware disappears, so will all our problems.