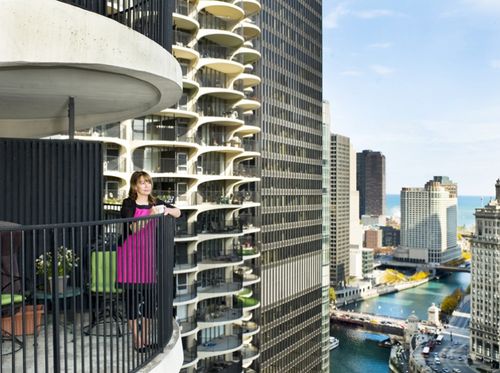 Last night I attended the opening reception for two new exhibitions at the Art Institute of Chicago. Bertrand Goldberg: Architecture of Invention and Inside Marina City: A Project by Iker Gil and Andreas E.G. Larsson are companion exhibitions, the former reviewing the architect’s entire career and the latter looking at the current state of his most famous building.

The instructional text in Bertrand Goldberg reiterates at every opportunity its subject’s humanism and concern for urbanism. The drawings, models and photographs in the exhibition, however, generally come across as dryly technical. They convey very little of the warmth of Goldberg’s buildings. This isn’t to say the exhibition doesn’t have small moments of surprise. For a while in the mid-1960s, just as his career was taking off, Goldberg worked for the Jack in the Box fast food company. The two sketches on display are the most unfinished in the exhibition. They’re almost doodles. Goldberg was either being playful or killing time in hopes the company would cancel the project. 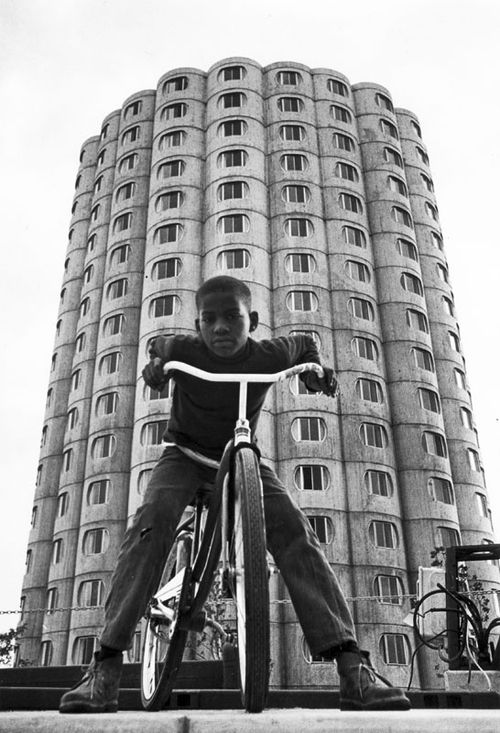 The cramped architecture galleries in the Modern Wing don’t allow for much elaboration beyond the basic points of the exhibition. Goldberg’s influence on the Japanese Metabolists is mentioned but not explored. Goldberg designed a number of institutional buildings, but there’s no indication of how controversial large-scale urban projects were at the time. His design for the Raymond Hillard Center, a public housing project on Chicago’s south side, is generally considered to be one of the most successful, or least disastrous, public housing projects built in the U.S. The only hint of the historical context comes from a photo of an African-American boy peering directly into the camera, an elderly housing tower behind him. This is the most arresting image in the exhibition, mostly because it’s one of the few that includes a person. 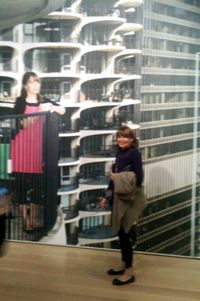 For a sense of how Goldberg’s architecture presented a more humane urbanism, supposedly the point of his design philosophy, it’s necessary to proceed to Inside Marina City in the neighboring gallery. Gil and Larssons’s images are formally structured but full of idiosyncratic content. Each photograph is a narrative about how urbanites have lived since the 1960s. There’s a bathroom with gold fringed towels and gold-plated fixtures; a bachelor pad stereo system circa 1975, complete with a reel-to-reel tape deck, dual turntables, and a liquor cabinet; an unmade bed with a pair of expensive bicycles. My personal favorite was a photograph of a woman eating Chinese food in a perfectly preserved salmon-pink kitchen. Several Marina City unit owners appeared at the reception last night and posed proudly before their images. I captured one subject in a blurry iPhone image at left.

Inside Marina City: A Project by Iker Gil and Andreas E.G. Larsson and Bertrand Goldberg: Architecture of Invention open this Saturday, September 17 and run through January 15, 2012.