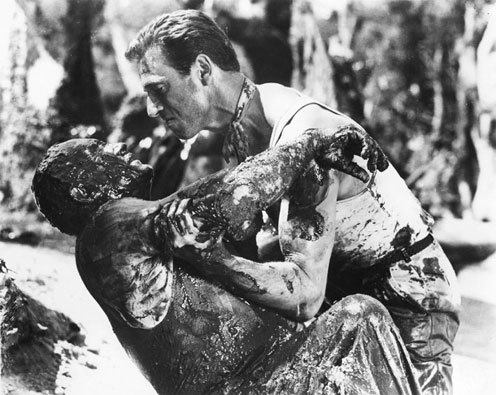 If you’re looking for an allegory of liberal despair in what’s looking distressingly like the dawn of the post-Obama era, look no further than The Wages of Fear (1953).

A quick plot synopsis: A collection of European layabouts are stranded in a dead-end town in an unnamed Central American country. They see an opportunity to escape when a well operated by an American oil company blows up. The Southern Oil Company hires four of the Europeans to drives trucks loaded with nitroglycerine across incredibly treacherous terrain. Only one driver, a Corsican played by Yves Montand, survives the trip to the oil field. He collects his wages ($2,000), plus the share of his co-driver, who died in a gruesome scene in which his leg was severed while flopping around in a pool of oil. On the return trip to the town the Corsican accidentally plunges his truck over a precipice and dies.

The film’s director, Henri-Georges Clouzot was known as the French Hitchcock for his ability to maintain suspense despite a deliberate, almost languid pace. But Clouzot is more pessimistic and less pyscho-dramatic than Hitchcock. When Clouzot moves in for a closeup his characters usually look away from their interlocutors, as if in shame.  They talk a big game, but when the camera zeros in on them, they wilt and withdraw. Only the Corsican’s co-driver, a French thug, dares to look back.

Contrasting with the embittered yet feckless Europeans is O’Brien, the American manager of the oil field. O’Brien is blunt, pragmatic and venal to the core. “They don’t belong to a union,” he says of the four Europeans he’s just hired for what amounts to a suicide mission, “and they don’t have any relatives, so if anything happens, no one will come around causing trouble.” The drivers depart in two trucks, ensuring a dangerous rivalry to deliver their volatile cargo. Sure enough, betrayals and disasters ensue. When the Corsican drives over his partner’s leg, he seems more exasperated than distressed. He had to keep moving through the oil pool, he explains, or the truck would have gotten stuck.

The Wages of Fear encapsulates a remarkable variety of our current ills from the BP oil disaster to the global economic doldrums. There’s the casually arrogant American corporate technocrats. The foreigners marooned by some obscure economic disaster in an anonymous place. Europeans fit only for cafe life and bitter infighting. The complete absence of any grounds for trust or resistance. Romance is thwarted. Cooperation and self-reliance are both delusions. No one questions for a moment if $2,000 is enough to risk one’s life for.

Ironically, this allegory of liberal gloom and despair–at least what I see as an allegory–was directed by a Frenchman with a checkered political past.  Clouzot’s second film Le Corbeau (The Raven, 1943) was a corrosive depiction of small-town French life. Clouzot landed in hot political water because of the film’s subject matter and because it was funded by a collaborationist studio. He was banned from making films for a few years. The Wages of Fear was cut for its American release, allegedly because of its anti-Americanism.  (Make sure you see the version restored in 1992.)

Diabolique (1955) is Clouzot’s most famous, and most Hitchcockian, film, but The Wages of Fear is surely his most contemporary. Even the slow pace of the film, its least contemporary quality, has something to teach us. During the first half of the film everyone is living on credit and trying gamely to have some fun. The scenes never resolve themselves satisfactorily. In the second half of the film the four truck drivers embrace personal responsibility and the free market system. The film assumes the linear trajectory we associate with the suspense genre. Their mission is successful in that the oil company can resume normal operations. The drivers’ initiative and daring isn’t rewarded. As viewers, we don’t get the compensation of a happy ending, unless you take comfort in the smooth running of an oil company.