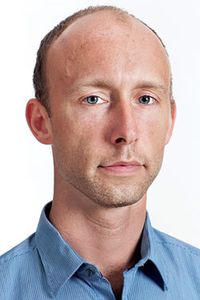 . The novel is getting a lot of buzz right now, the most since Téa Obreht’s The Tiger’s Wife

last spring. Both novels are compulsively readable works of literary fiction by poised and likeable first-time novelists. The audiences for both novels skew heavily in favor of the author’s gender. One woman noted that Harbach’s novel was “the best novel about college baseball I’ve ever read”–a comment meant to damn with faint praise.

Harbach writes convincingly about baseball, prompting the inevitable question: Why are there so few great baseball novels? Reeves Wiedeman says baseball should be fertile ground for novels. Writing in the Atlantic, Wiedeman says,

I was struck by how effective the sports team was as both a plot and literary device. Baseball—and most good sports novels are about baseball—lends itself especially well. It is a team game, affording authors the ability to explore relationships between teammates, coaches, and opponents. But it also a game with extreme moments of aloneness: individual triumph and individual failure are what we remember. Harbach was a middle infielder, like Henry, but his career ended in high school. He claims to have done only a small bit of research for the book, but to my ear—one that has, admittedly, never heard the sounds of a Division III baseball locker room—Fielding rings true.

I also thought Fielding rang true, although I doubted a college baseball team would accept an openly gay teammate so readily. In an interview with The Paris Review, Harbach compares himself to the novel’s main character, a slender but slick-fielding shortstop.

I was Henry-like (though with hardly a shred of his talent) in the sense that I was a good athlete who was too small and slight. I blame my parents for starting me in school early and making me forever the youngest guy on the team.

No less of an authority than Baseball America declares, “the baseball details are so realistic they seem stolen from an actual small college somewhere in the American heartland.”

In the same review in BA, James Bailey describes Harbach as the Stephen Strasburg of literary circles. Translated from Baseball, that means Harbach is a promising young talent who attracted a huge signing bonus. New York magazine reports,

Harbach was, until March 2010, an under­employed freelancer whose biggest job, co-editing the journal n+1, was unpaid. He’d recently been laid off from a gig copy-­editing for McKinsey, the consulting firm, when, after nine long years, Harbach ­finally decided his first novel was ready for the market. The market agreed: Little, Brown beat seven other bidders and paid $650,000 for it.

New York saw the bidding for The Art of Fielding as a sign of the return of large advances for debut literary novels. The Point magazine interprets Harbach’s rags-to-riches story in another way. J. Keenan Trotter calls The Art of Fielding “the first novel to emerge from the student loan crisis.”

With the publication of his novel Harbach to repay his student loans and move into the big time of American literary culture, at least its New York section. Gregory Cowles writes in The New York Times,

Measured against other big, ambitious debuts by striving young writers [ . . . ] “The Art of Fielding” is surprisingly old-fashioned and almost freakishly well behaved. There’s some strained humor in the early going, when Harbach seems unsure of his register, but once he settles into a mildly satiric mode of psychological realism — the mode of latter-day Jonathan Franzen, rather than the high turbulence of David Foster Wallace — the book assumes an attractive, and fitting, 19th-century stateliness.

Harbach doesn’t quite have Franzen’s range or mastery over irony; otherwise, the comparison is apt. There’s also something nineteenth century about the novel. The novel is full of references to Moby-Dick, Harbach’s favorite novel. Harbach gazes upon his microcosmos like George Eliot with a sense of humor. He slyly comments on the commodification of school spirit by inventing a tee shirt that reads, “WESTISH COLLEGE: OUR DICK IS BIGGER THAN YOURS.” And like a nineteenth-century novelist, and a lot of first-time novelists, you can see Harbach rather awkwardly breathe life into his characters, then set them on their way.

Characterization is one of the few aspects of the novel that critics have had reservations. In a generally positive review, The Washington Post‘s Dennis Drabelle points out,

Some passages in the novel run too long: for example, an extended description of the ostentatious warm-ups performed by one of Westish’s rivals. Unlike the other main characters, Owen seems undeveloped — more of a winsome concept than a real person. At one point, Pella dismisses Henry as “a silly kid with a silly problem,” and indeed the novel itself occasionally veers toward Young Adult status — much ado about college games.

Actually, I liked the scene Drabelle cites. It’s an example of the gentle satiric comedy in the novel. Plus, it’s realistic: I can image the nervous Westish players watching their opponents’ warmups with trepidation.

Less realistic, though, is Owen Dunne, a character that other critics have objected to as well. I know Harbach means to stress Owen’s Otherness (he’s gay), but the character comes across as too poised, too perfectly himself, especially for an eighteen year-old. Henry Skrimshander (the name is yet another Melville reference) floats through the story in a cloud of resin dust, although one could argue that he’s like any other obsessively focused athlete: his will is awesome to behold, but otherwise he’s flatly conventional in his tastes and attitudes.

I didn’t think The Art of Fielding ever ventured into Young Adult territory, even though there are no adults in the novel to speak of except for the college president, a Melville scholar. Harbach’s novel is as much a college novel as it is a baseball novel. The collegiate setting allows Harbach to pack his novel full of literary references. Westish College’s entire curriculum seems to consist entirely of American Romanticism. Baseball gives the novel a ballast of realism. For Harbach baseball isn’t a metaphor; it’s a world. This is what makes The Art of Fielding a great baseball novel and a very fine novel.