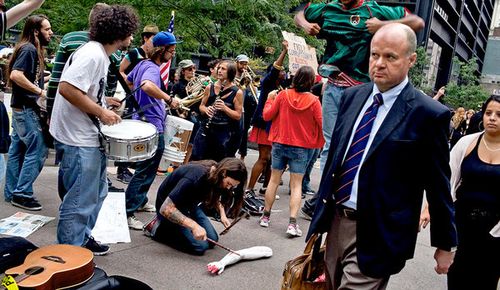 When I last checked on the protest movement called Occupy Wall Street on Friday, the demonstrations were petering out. I figured they’d flip over a Porsche Cayenne then call it a day.

Then over the weekend the NYC police pepper sprayed the protesters. One of the officers involved in the pepper spraying, Anthony Bologna, had been accused of arrest and civil rights violations in a claim brought by a protester involved in the 2004 demonstrations at the Republican national convention.

Perhaps as a result of Sunday’s clashes with police, the movement has been re-energized. Celebrity protesters are joining in.

Much has been made in the alternative press about how the mainstream press is allegedly ignoring the protests.

So someone set up a live feed.

There are reports of the protests spreading to other cities.

People are getting pretty excited . . .

. . . even as others start to lob reality bombs from the sidelines. At This Big City Theodore Brown says a lack of investment in urban infrastructure is the real cause of inequality, not rapacious Wall Street bankers.

Unfortunately the protesters, who’s hearts are undoubtedly in the right place, are chasing the tail and not the head. Rising poverty and stagnant opportunities weren’t caused by financiers anymore than the hostage crisis was caused by President Carter, the cascading scenarios dictated the results rather than the individual actors. The mystifying belief that financial institutions stole cash out of our hands (TARP fund aside—do you want to imagine what would have happened without that? Didn’t think so.) is conjured heuristically—relative deprivation is a strong emotional argument.