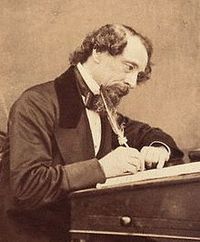 “Read Dickens Now!” urges Michael Levenson, and it’s hard to resist the command. Dickens is the greatest English novelist ever. Sure, the novels go on and on–I swear it takes more effort to read David Copperfield than it did to write it–and his main characters are virtually without exception bland and uninteresting. He is sentimental in the older, Romantic sense of a unity of thought, feeling and body, a once-powerful belief undermined first by Realism, then killed off altogether by Naturalism, with Freud coming along later to flay the corpse. His social vision isn’t as precise as either George Eliot or Emile Zola. Flaubert was more modern.

But what sentences! Look at the unusual rhythms of this passage, the second paragraph of Bleak House:

Fog everywhere. Fog up the river, where it flows among green aits and meadows; fog down the river, where it rolls defiled among the tiers of shipping and the waterside pollutions of a great (and dirty) city. Fog on the Essex marshes, fog on the Kentish heights. Fog creeping into the cabooses of collier-brigs; fog lying out on the yards, and hovering in the rigging of great ships; fog drooping on the gunwales of barges and small boats. Fog in the eyes and throats of ancient Greenwich pensioners, wheezing by the firesides of their wards; fog in the stem and bowl of the afternoon pipe of the wrathful skipper, down in his close cabin; fog cruelly pinching the toes and fingers of his shivering little ’prentice boy on deck. Chance people on the bridges peeping over the parapets into a nether sky of fog, with fog all round them, as if they were up in a balloon, and hanging in the misty clouds.

The repetition of “fog” and its counterpoint in the irregular clauses indicate an eccentric, restlessly animating mind. His minor characters spring to life in the same manner. Dickens is at his best when he looks closely at the insignificant and lets his sentences fly. His other, less interesting mode is when he nudges virtue to its happy end. However, without that bourgeois Victorian mode to give them structure the minor characters would be little more than a parade of grotesques.

There are two new biographies of Dickens, and Levenson provides a good introduction to them. At issue in the two versions of his life is his cruelties, especially toward his wife. What’s more important, and to my mind more interesting, is grasping Dickens’ essential weirdness. For a man who devoted enormous energies to self-dramatization Dickens is a surprisingly enigmatic figure. He was the most driven writer I’ve ever read about, but it’s never clear what drove him. It’s tempting to trace his prodigious energy to his impoverished childhood, as if he were forever running away as quickly as as he could from himself as the little boy at the blacking factory. That explanation, though, seems too simple, too close to nineteenth-century determinism. A more Dickensian explanation would be that he was driven by a rage to take it all in–sex, London, fame. It’s that rage that made him so great.