For every one piece of good news in the Chicago architecture scene there seems to be five items of bad news. Here’s the latest piece of bad news: 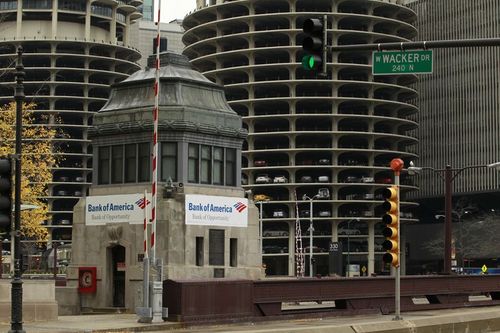 Yes, those are Bank of America advertisements on the Wabash Avenue bridge over the Chicago River. Not only do the ads deface an architectural landmark in the middle of the city, pedestrians and motorists have to be continually reminded of the transnational scumbags who contributed to the near collapse of the economic system. The ads are part of Mayor Rahm Emanuel’s plan to balance the city’s budget by selling ads on city property.

Chicago Tribune architectural critic Blair Kamin fumes, “What’s next? Flashing neon signs on the Water Tower? A warehouse-store promotion on the Picasso? A pork-and-beans ad on the Bean?” Victor Margolin, a professor of art history at UIC, writes an open letter to Emanuel, accusing him of failing to “respect the cultural value of [the city’s] architectural heritage.” Margolin also points out that the Bank of America is one of the primary targets of the Occupy Wall Street movement. ” To host Bank of America advertising on city property is to suggest that the city administration is ignoring the nationwide protests against the bank and is in fact supportive of them.”

Kamin reports that the Bank of America ads will be removed from the Wabash Avenue bridge will be gone by December 12. (The Wabash bridge was chosen because the more opulently Parisian Michigan Avenue bridge is a registered landmark.) As yet no other corporate sponsors have signed up for the city’s deface-a-landmark program. Nevertheless, most likely more corporate graffiti will appear on a downtown bridge in the near future.

The Tribune photo above is by Chris Walker.