The Yale School of Architecture hosts an exhibition, Gwathmey Siegel: Inspiration and Transformation. The exhibition examines the work of Charles Gwathmey and Robert Siegel and their associates. Among the highlights of the their careers were the renovation of the Yale School of Architecture’s Paul Rudolph Hall, as well as additions and renovations of the Fogg Museum at Harvard University and the Guggenheim Museum in New York City (above). The exhibition runs through January 27, 2012. More information can be found here. 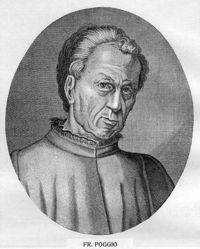 Stephen Greenblatt’s The Swerve: How the World Became Modern

won the National Book Award for non-fiction. The book tells the story of Poggio Bracciolini (at left) and his discovery, in the early 15th century, of a philosophical poem by Lucretius, a Roman disciple of the Greek philosopher Epicurus. The discovery of On the Nature of Things caused a scandal. Lucretius’ argued the world is made up of atoms and pretty much nothing else. Among other implications, that threw out the Christian doctrine of the immortality of the soul. I’m neither a classical scholar or an expert in the Renaissance, but found The Swerve an engaging read, especially Greenblatt’s account of how Bracciolini launched his career as a hunter of ancient books. (It was his second career; his first was the amanuensis of Pope Boniface IX, who got himself kicked out of the papacy for being an asshole.) The story of the discovery of Lucretius’s book has the historical density of an Umberto Eco novel, although the last chapter feels rushed. Nevertheless, I highly recommend The Swerve.

Finally, the latest news in the battle to save the old Prentice Women’s Hospital, designed by Bertrand Goldberg (and the birthplace of my eldest child), is, well, an unsubstantiated rumor. Blair Kamin tries to track down a report that the city of Chicago won’t issue a demolition permit until Northwestern University, the building’s owner, presents a concrete plan to build something in its place. He can’t get any confirmation. In the meanwhile, the hospital stands empty, deteriorating as winter approaches.