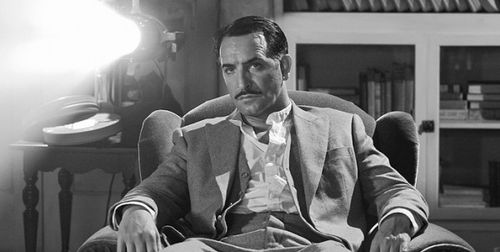 Two films inspired by the silent cinema will be released this weekend in the U.S. One is  Michel Hazanavicius’  The Artist and the other is Martin Scorsese’s Hugo. The first is a Frenchman’s view of American cinema in the late silent era, when the Hollywood studio system and the Hollywood classical style were first in place together. The second is an American’s view of early French cinema, especially Georges Méliès, the magician turned filmmaker. But both films are about the perishability of cinema in its stylistic and technological senses.

The Artist tells the familiar story of Hollywood actors, actresses and directors whose careers were ruined by the advent of sound in the late 1920s. Studios and filmmakers resisted the migration to sound cinema. Studios worried their backlist of films would become obsolete, and directors lamented the taming of the cinematic image with the arrival of diegetic sound. Despite his admiration for great silent-era directors such as F.W. Murnau, Hazanavicius shot The Artist as a sound film. For instance, the film is full of match-on-action cuts, which didn’t appear until G.W. Pabst’s The Joyless Street (1925) and wasn’t naturalized into the classical Hollywood style until the early sound era. The Artist is both too fluid and too conventional to be an authentic silent film. Hazanavicius locates the disappearance of an entire mode of filmmaking exclusively within movie stars, themselves products of a studio system that transitioned relatively unaltered into the sound era.

Another lost cinema appears in Hugo, in which Scorsese refers to the  tragic loss of over half (by some estimates) of the films made in the silent era (1895-1927). These films were shot on acetate-based celluloid, which was highly susceptible to fire and decay. Scorsese’s film appears a week after a report predicting the impending near extinction of 35mm film, the international standard since 1909.

News of the to the demise of celluloid has been greeted with mournful resignation. Roger Ebert writes, “my war is over, my side lost, and it’s important to consider this in the real world.” A.O. Scott cautions against “golden-ageism that has become a critical default position” in regard to the disappearance of film stock and, with it, the decline of theater exhibition, generally regarded as the essence of cinema. Still, Scott has to admit, “It can be hard to escape, and even harder to argue against, the feeling that something we used to love is going away, or already gone.”

Ironically, Hugo is a 3D film, a technology credited with killing off analogue film and reviving the theater as the optimum place to watch a movie. Like many American movies today, Hugo‘s target audience is children. The combination of spectacular special effects and storytelling aimed at juveniles (or simply juvenile storytelling) has ruined American cinema as a popular art form. Most Hollywood films, the thinking goes, are made to be marketed.

And yet the unlikely appearance of two films steeped in silent film history may also express a longing for a time when the spectacle of cinema meant wonder rather than distraction. The film historian Tom Gunning coined the term “cinema of attractions” to describe the audience appeal of very early (before 1906) films. The movies of  Georges Méliès and other movie pioneers flaunted the new technology of cinema, making the novelty of the moving image the primary focus of interest. The cinema of attractions is an exhibitionist cinema, a cinema that wants nothing more than to show off its own ability to conjure up reality. Gunning argues that the cinema of attractions didn’t vanish completely with the development of the classical Hollywood style, with its voyeuristic depictions of a naturalized world. Rather, the exhibitionist style of early filmmakers resurfaces periodically, most notably in avant-garde film. The cinema of attractions doesn’t invoke childlike wonder. Rather, it places the moving image at the very heart of what it means to be modern. Neither The Artist nor Hugo accomplish this feat on a consistent basis, but there are flashes of the beguiling charms of old celluloid.</p