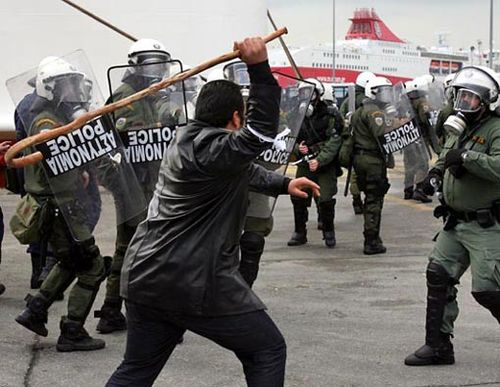 A couple of weeks ago the German philosopher Jürgen Habermas stood before a hot, crowded lecture hall at the Goethe Institute in Paris, banged his fist on a table, and shouted, “enough already!” He was referring to the current state of Europe and its slide, as he sees it, into undemocratic forms of rule. It would have been astonishing to hear Habermas raise his voice if the hall was on fire, so clearly the “post-democracy” that  Angela Merkel and Nicolas Sarkozy have forged has driven him around the bend.

If Walter Benjamin is the great romantic of the Franfurt School, Habermas is its anti-romantic. His best-known book is The Structural Transformation of the Public Sphere

, which has long influenced me. (The Public Sphere section of this blog is inspired by Habermas’s book.) In this work he expanded upon  Horkheimer and Adorno’s analysis of the culture industry, historicizing it and draining it of Adorno’s trademark gloom and pessimism. Where Horkheimer and Adorno saw giant corporation turning culture into a means of manipulation and repression–Mickey Mouse as hegemon–Habermas sees a breakdown of individual participation in political and cultural debates in the public sphere. Corporations and other entrenched powers may distort and confuse debate, but they’re not irredeemable threats to modernity.

In his latest book, however, Habermas tilts toward Horkheimer and Adorno’s skeptical view of Western culture. The argument of  Zur Verfassung Europas (On Europe’s Constitution) is that the great experiment in European unity is at a crossroads, undermined by market frenzy and political spinelessness. Institutions of questionable legality, controlled by unelected technocrats, have taken control of the continent’s political economy. He wants the future of Europe to be in the hands of what he calls the “global community,” by which he means, presumably, the citizens of Europe. In other words, the immensely frustrated citizens of Greece should have a voice in the debate about what to do about the debt crisis–as opposed to being reduced to caricatures of Southern fecklessness.

Habermas is a believer in a united Europe. He sees it as a project worth pursuing. However, he regards the democratic underpinnings of the union as critically endangered. He concluded his Paris lecture with this warning: “If the European project fails, then there is the question of how long it will take to reach the status quo again. Remember the German Revolution of 1848: When it failed, it took us 100 years to regain the same level of democracy as before.”

Just as the U.S. isn’t immune to the economic crises of Europe, we’re not immune to its political crises. In fact, we may be out in front of Europe in the development of a post-democracy.