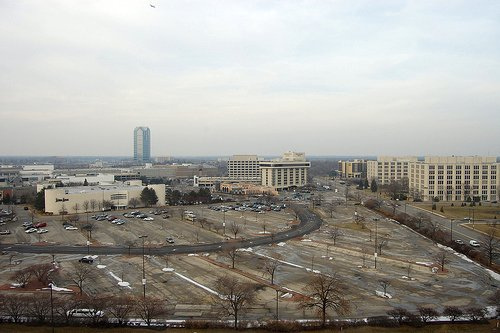 Drive any distance in the U.S. near a major city and you will see them: glassy in the modernist way, boxy like a warehouse, surrounded by lawns, trees, and squadrons of Canadian geese. They are suburban office buildings, sprouting just beyond the highway interchange. They offer all the familiar comforts of the suburban house, complete with mismatched furniture, unidentifiable indoor plants, weird stains on the carpeting, and rotting food in the refrigerator.

You may pay no more attention to them than a road construction crew, but Louise Mozingo reveals they have an interesting history. The history related in Pastoral Capitalism: A History of Suburban Corporate Landscapes

begins during the economic boom of mid-twentieth-century, when American corporations packed up their Selectrics and moved to the pastoral expanses of the suburbs, where middle managers could roam freely.

Mozingo links the development of the suburban office building to the history of postwar global capitalism. Corporations became larger and more complex, their ownership structures more obscure, but office buildings retained their aura of white-collar domestic virtue, as if the CFO mowed the lawn himself.

Walter Benjamin once wrote the goal of modern architecture was to produce a space that didn’t produce traces of the lives lived within it. This perfectly describes the suburban office building. Their bland facades mask the organization churn within. Mozingo documents the restlessness of the corporations housed in suburban towers. Trailer parks are more stable than corporate office complexes. AT&T has been expanding and contracting like the tides in office parks across America since the 1940s. Mozingo is a straight-laced writer, but she can’t resist a bit of sarcasm when describing the promiscuity of American corporations and their dwellings as “pastoral status with an exit strategy.”

Corporate office parks may be landscaped like golf courses, but they don’t encourage relaxation. They are generally better designed than suburban houses, but they never inspire attachment. Nevertheless, they are very prominent, if unloved, elements of the North American landscape, so they are important objects for study. Mozingo has done an excellent job of explaining how these structures have come to be the dominent form of office space for much of the developed world. After reading Pastoral Capitalism I was left with only one question: When did all those damned Canadian geese start appearing on U.S. corporate parks?