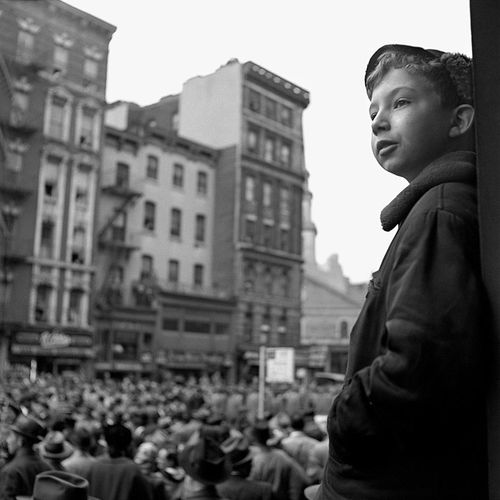 If you’re like me and you still have some key presents to buy, here’s a suggestion of an art book with a nice backstory–and some compelling images. Vivian Maier worked as nanny and housekeeper in New York starting in 1951, then in Chicago after 1956. Somehow she found time to wander the streets of the cities with a Rolleflex camera, snapping photographs of life in public spaces in the city. None of her photographs were published in her lifetime. In fact, they were almost lost before her death in 2009. They are collected in Vivian Maier: Street Photographer

The book is a series of images of ragged beauty in the Dorothea Lange manner. Maier presents a Depression-era view of urban America during the post-war boom. Women and children are of particular interest for her, as are beaten down men. The class markers are striking: A hostile glance from an upper-class matron, the jaunty smile of a working-class man with a broken nose. Maier’s New York and Chicago are run-down city cluttered to discarded building materials, as if cities were being remodeled. She avoids all city landmarks. Nothing says the United States except maybe a general mode of life, a style of dress or an isolated cultural detail like a boy’s coonskin cap.

Maier typically shoots in a tight frame. Her best photographs are like a slice of consciousness. Her children look once cute and wary, as if a private fantasy is being disrupted. When she pulls back from her subjects, the background reflects their inner states. In one of her most staged, abstract shots, four middle-aged women stand against a limestone wall, gazing at a low winter sun, waiting for something to carry them away.

The staginess of this image indicates there’s nothing naïve about Maier’s work. She was clearly self-conscious of herself as an art photographer. Although many of her photographs were candid shots, Maier was no voyeur. Urban space was a studio in which she felt very comfortable. She was as patent as a nature photographer, waiting for a long time for a scene to coalesce into meaning.