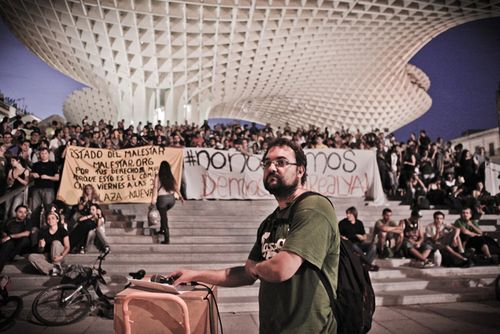 The 12th issue of the journal MAS Context appears to be its longest and, perhaps not coincidentally, among its strongest issues. The theme is aberration and, as co-editors Iker Gil and John Szot explain, the thirteen features all address the moments when architects and designers “abandon idealistic convention in pursuit of ideas that embrace the irreverence of material reality.”

The centerpiece of the issue is the protests in the Metropol Parasol, a sprawling, blob-like structure in the Plaza de la Encarnación in Saville, Spain. Its architect, Jürgen Mayer, tells Vladimir Belogolovsky, “What I try to achieve in my work is to use it as a medium to create spaces that go beyond programmatic needs and leave open areas for potential invention of program.” Sure enough, the Metropol Parasol became the staging ground for the Movimiento 15M protests last May. As Ethel Baraona Pohl explains the site was chosen because it represented the excesses of public spending in Spain. At the same time, Mayer’s public space proved to be an excellent gathering point for the protesters. Derided as “pure formalism,” Mayer’s forms were ambiguous enough to provide, in Baraona Pohl’s words, “a sort of physical manifestation of social indignation and reaction.”

In the U.S. the Occupy Wall Street movement has intrigued architects hoping they had somehow shaped the movement by their designs of public space, as if the movement was born of the walls surrounding its gatherings. Architect Michael Chen debunks Malcolm Gladwell’s claim that the Occupy Wall Street movement is little more than a chimera conjured up by social media. Chen claims the protesters are using social media to forge weak-link connections, allow them to organize effectively, if not efficiently, across dispersed spaces. The protesters in Zuccotti Park have invented “hash tag planning, a high-absorbency mode of urbanism” made possible by the prevalence of profile data. The protesters are more than a collection of cellphones. Profile data makes them thicker than a normal network mode, allowing for affinities with other similar profiles across the park and across the globe. The Zuccotti Park encampment contains political tactics every bit as innovative as advanced architecture.

While disaffected residents of Saville and New York took to their public squares to register their displeasure at the current state of global capitalism, the residents of Sheffield, England simply wanted to appropriate a pair of cooling towers as the symbols of their post-industrial city. Tom Keeley started looking closely at the towers at an abandoned power plant and decided they were perfect “lo-fi and scruffy” symbols for the city. His fanzine Go galvanized support for the idea of beauifying the towers, a novel idea in England, although the Germans are quite good at this sort of thing. Unfortunately, the power company, evidently owned by Mr. Burns, got wind of the plan and promptly demolished the towers in the middle of the night.

Sheffield lost its dysfunctional landmark forever, but Emilio López-Galiacho imagines some more. He creates structures that are surrealist vignettes made of industrial clutter and bodily organs, then burnshes them to the sheen of a marketing proposal. It’s hard not to read López-Galiacho’s images as a commentary on the current state of the real estate market: Exquisitely engineered structures turned monstrous by a terrible financial market.

An even darker vision emerges from Lebbeus Woods’ essay on the ineffable, one of the subjects banished from architecture.  “The ineffable is revealed only when the curtain of normalcy around us is pulled away and we are confronted with a very different world than we imagined we inhabit,” Woods writes. He provides several examples of the hard-edged, harrowing side of aberration, including the 9/11 attacks. Woods isn’t proposing a building style so much as trying to inject a marginalize discourse into architecture.

Similarly, John Szot attacks architecture’s “inflexible idealism” by incorpating Tokyo’s chaotic urban fabric into a single residental tower constructed mostly of steel and LED lights. Szot applies randomness into a building structure that continually surprises. The building is one pleasingly askew space after another, although the design also reveals domestic space to outside inspection in ways that aren’t to everyone’s tastes. 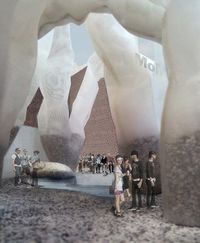 In another contribution to the issue Szot talks to a pair of kindred spirits, Julian Rose and Garrett Ricciardi, partners in Formlessfinder. Rose and Ricciardi are big Georges Bataille fans, which you don’t find very often among architects. They share Bataille’s skepticism about the visual, denouncing image-oriented architecture, that is, buildings that exist primarily to be photographed. When buildings are mere images, they lament, “the primary output of architects, the richness of physical and spatial experience is flattened into spectacle.” Their aesthetic of formlessness can best be summed up by the statement, “anything can perform structurally.” You don’t need a column to hold up a structure. A pile of rocks will serve. This approach makes for some unlovely buildings, but that’s the point. Architecture magazines are full of lovely buildings and the American landscape is still cluttered with hideous structures.

Rose and Ricciardi’s buildings are not truly formless, of course. One could dismiss their call for formlessless as just another inflexible idealism, but that would miss the point of the theme of the issue. As Gil and Szot write, “there are moments in life where the ambitions of idealistic thinking block access to the profound reality lurking within the quotidian.” Most architects working today try to contextualize their designs, but generally contexts are limited to other architectural forms–older idealisms–and maybe a landscape. The contributors in ABERRATION are thinking in larger, and smaller, terms. The exporations of form and materiality featured in this issue give a sense of the innovative thinking at work in small architectural firms around the world.

There are lots of architectural websites and blogs. Most of them, however, are essentially PR outlets for developer projects. With this issue MAS Context has become one of the best showcases for innovative architectural work.