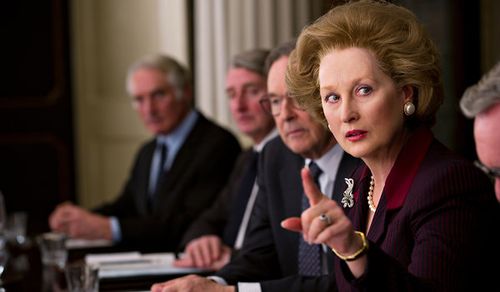 For an American, it’s hard not to look at Margaret Thatcher and not see Ronald Reagan. Both were tenacious and divisive leaders of a conservative revolution that continues to this day, with distressingly few updates along the way. Just as Reagan marked the beginning of the end of American liberalism as shaped by Franklin Roosevelt, Thatcher completely inverted the social and political agenda that had been in place since Harold Macmillan. Yet these days she doesn’t inspire anywhere near the devotion American conservatives have for Reagan. Partly that’s due to the differences in political cultures, partly because of personality differences. Reagan was affable and avuncular, even though he didn’t show any evidence of an inner life. Thatcher, on the other hand, was the “the Milk Snatcher,” a fulsomely nasty politician who grated on everybody’s nerves until her own party tossed her to the back bench, where she concluded her political life as MP for Finchley, staring daggers at John Major.

From a distance of thirty years, when Reagan’s morning in America has turned into the 2 AM night sweats, Thatcher’s life story is fertile ground for a biopic. She rose from modest beginnings as the “grocer’s daughter from Grantham” to become a fiercely determined politician who overcame sexism and class prejudice of the Tories. This story arc figures prominently in Phyllida Lloyd’s The Iron Lady, but the biopic entertains a perplexing competing story: Thatcher’s development from ambitious harridan to daft old woman. Meryl Streep portrays Thatcher with her usual technical perfection, grafting the verve of her Miranda Priestly onto the lumbering physicality of her Julia Child. Streep gives no hint of chafing against the fate in which the movie casts her character. Nor is the film much interested in Thatcher’s actual policies and their effect on British culture and the economy. For that last point you have to go to Stephen Frears’ Sammy and Rosie Get Laid (1987), especially the squatters’ camp eviction scene.

Some have detected a whiff of sexism in The Iron Lady‘s fascination with Thatcher’s sad dotage. Indeed, no one revisits Reagan’s senile last years feeding pigeons in a park. Was Margaret Thatcher any more odious than Rick Santorum or Rick Perry? At any rate, Lloyd and scriptwriter Abi Morgan’s treatment of Thatcher is at least consistent with the ideology the British prime minister espoused. Her doctrine of the self-sufficiency of the individual repudiated the notion that a person’s life was shaped, if not wholly determined, by the social, cultural, and historical forces surrounding him or her. Thatcher’s brand of conservatism always collapsed the political economy into matters of personal moral rectitude. It’s a historically inaccurate but politically consistent portrait of Thatcher to downplay her political accomplishments in favor of her descent into pitiable near madness. It’s too bad, really. She may have been heartless, but at least she wasn’t empty, like Reagan.