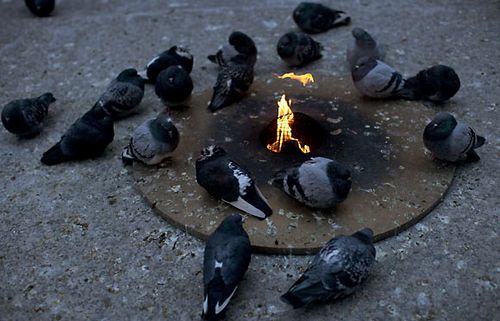 We’re in the middle of a snowstorm here in Chicago, which means harrowing drives and shoveling driveways. It’s a good time to be inside. (The pigeons above were photographed in Daley Plaza by the Chicago Tribune’s E. Jason Wambsgans.)

And if you’re hunkering down for the night, then the thing to do is watch Downton Abbey on Netflix streaming. Roger Ebert expresses the essential contradiction of most (including mel) English majors: most of them are liberals, but the discipline itself has a conservative streak, especially when it comes to English country houses.

although my politics are liberal my tastes in fiction respond to the conservative stability of the Downton world. The more seriously I can take it, the better I will like it. To be sure, there is monstrous unfairness in the British class system, and one of the series themes is income inequality. What must be observed, however, is that all the players agree to play by the same rules. In modern America the rich jump through every loophole in the tax code. But look what happened in the first episode of “Downtown Abbey.” The Earl’s presumptive heir went down with the Titanic and the title passed to a distant cousin, Mr. Matthew Crawley of Manchester, who now stood to inherit the title, the house, the land and the money–including the personal fortune of Cora, the Earl’s wife. So deeply are the principles of inheritance embedded in the Crawley family that both the Earl and his wife seem staunchly prepared to give up their earthly possessions and be courteous in the process.

Be forewarned: As my wife and I discovered to our dismay, there are only seven episodes in the first season, which concludes, abruptly, with the announcement of the start of World War I. Just as the world of Downton Abbey has sucked you in, it blows up.

As long as we’re in retro mode, the death of the remarkable Johnny Otis, followed by the death of one of his discoveries, Etta James, offers an occasion to look at the transition from big band jazz to rock and roll as America’s pre-eminent form of popular music. Ben Greenman at the New Yorker has a nice tribute to James.

And finally–I have to hit the road now–here’s an unlikely curl-up-with-a-good-book recommendation: Michel Houellebecq’s new novel, The Map and the Territory

. It’s been called his Annie Hall, which is the last comparison you’d ever think someone would make. I’m 5% into it on my Kindle for iPad, and so far it’s an engaging account of a Parisian artist trying to make sense of the culture around him. It’s what a novel should do, and Houellebecq, against expectations, is a novelist equipped to do it.