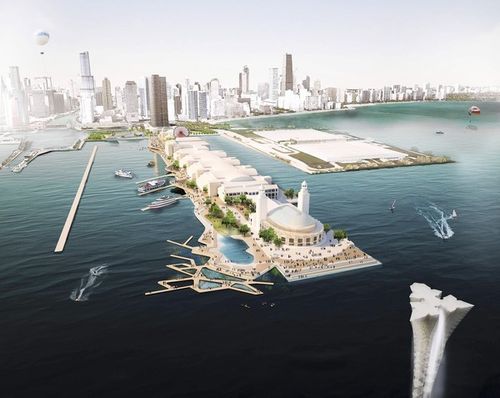 Today and tomorrow five design teams will unveil their plans to fix Navy Pier, Illinois’ most popular tourist attraction. Navy Pier isn’t the most broken public space in Chicago, and it underwent a $200 million revamp in the 1990s, but attendance is starting to drop off (8.7 million visitors in 2010, down from 9 million in 2000) and the city needs all the cash it can get.

The budget for the project is $85 million, or about what it cost to erect a hot dog stand in Milennium Park, and almost all of the proposals go way over that figure. However, the city hopes that the five proposals will generate enough excitement to inspire some donations from the private sector. If not, each design proposal has some elements that could easily be dropped from the final plan. (See gondolas below.)

Mostly the architects contrive to get people to walk the length of the pier and, sometimes, beyond. A couple of the proposals make it possible to stroll (or fall) directly into the water.  People wander up and down the pier now, but the outside space is mostly a sequence of concrete plazas, like the deck of a concrete ship. A favorite tactic of the architects is to replace the concrete with wooden walkways, the more complex and disorienting the better. Still, even the most complex walkway proposal, by Davis Brody Bond/Aedas/Martha Schwartz Partners, is better than the interior of Navy Pier, which is a dark warren of junk space.

Each proposal also comes with a doodad to be added to the pier’s already overwhelming collection of attractions. Depending on which design proposal wins, and where the budget axe falls, Navy Pier could have a new vertical urban farm (courtesy of AECOM/BIG), a fish resort (!melk/HOK/UrbanLab), an amphitheater with no stage (James Corner Field Operations), and gondolas to ply the choppy waters of Lake Michigan (Davis Brody Bond/Aedas/Martha Schwartz Partners). !melk/HOK/UrbanLab not only want a fish resort, whatever that is, they also want to stick a “glacier” in the middle of the lake, where it will stand to remind Chicagoans of their miserable winters until it gets rammed by a drunken motorboater.

The winning team will be chosen some time next month, or whenever pier officials can make up their mind.