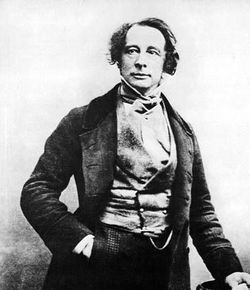 Charles Dickens’ 200th birthday is being celebrated around the globe  today. He’s being remembered as the greatest English-language writer of the Victorian era, primarily because of the quality of his language and his amazing inventiveness in creating characters. It’s also worth recalling Dickens as the social critic.

His two main social themes were a sustained protest of the abuse of children and the corruption of individual feelings. These themes ran throughout his career, intensifying and becoming more pessimistic in his later novels. In his early, more hopeful novels, the problems of his protagonists, often orphaned or abandoned as children, are solved by the benevolence of good men and women. The young David Copperfield runs away from his repressive school and the harsh Murdstones and walks from London to Dover driven by the blind hope that his Aunt Betsey, estranged from his mother at his birth, will take him in. His faith is rewarded, and David eventually forges his own path to security.

David Copperfield was serialized in 1849-1850 at a time of stark political differences, when the British Empire was at its height and political revolt broke out in Europe. (The photo above was taken during the serialization of David Copperfield.)   Beginning with Bleak House, his next novel (1852-1853), Dickens’ vision turned darker. The helplessness and despair David experiences in the first 14 chapters of his story become a generalized condition. The fate of  Bleak House‘s Richard Carstone is emblematic of his author’s lost faith in the ability of individuals to have any effective control over their own lives. Worse, social institutions like the judiciary in Jarndyce and Jarndyce are at best indifferent to the fate of ordinary citizens.

Despite the savagery of his social criticism Dickens never lost his popularity with the reading public. He was a classic liberal by the standards of his day, as well as by our own standards. Revolution appeared in his novels, Barnaby Rudge and A Tale of Two Cities in particular, and Dickens was generally even-handed in his depiction of political rebellion.

Yet he wasn’t a radical himself. He was a firm and consistent defender of the middle classes. If Thackeray occupied the border between the middle and upper classes, Dickens straddled the middle and working classes. Dickens repeatedly asserted that virtue could appear in a person of any class, but he never attacked the British class system as a whole.

Although Dickens is the quintessential Victorian writer, in many ways his world view was formed by eighteenth-century notions of sentiment, in which emotions were shaped by sense perceptions and imagination is essential to the grasping of ideas. For Dickens the problem of the class system was that it blinded its members to the suffering and virtues of other people. In place of a classless society Dickens wished for something like an empire of empathy. His novels became the lens through which his readers could see into the humanity they shared with people different from themselves.