They say this winter is only the sixth warmest in Chicago, but it must be among the top two or three oddest winters the city has experienced. We’ve had three snowstorms, all of them striking in the afternoon, throwing the evening commute into chaos. Today is the third.

Anyway, this week’s edition of Fun Friday looks at cyberflâneurie, the online version of flâneurie. Evgeny Morozov argues that cyberflâneurie a.) once existed and b.) is now dead. The early Internet–i.e., the 1990s–was a low-baud rate landscape of quirky online communities like GeoCities and Tripod. The contemporary Internet has been taken over by large corporations, much like real public space. Morozov writes,

Transcending its original playful identity, it’s no longer a place for strolling — it’s a place for getting things done. Hardly anyone “surfs” the Web anymore. The popularity of the “app paradigm,” whereby dedicated mobile and tablet applications help us accomplish what we want without ever opening the browser or visiting the rest of the Internet, has made cyberflânerie less likely. That so much of today’s online activity revolves around shopping — for virtual presents, for virtual pets, for virtual presents for virtual pets — hasn’t helped either. Strolling through Groupon isn’t as much fun as strolling through an arcade, online or off.

The Internet is now relentlessly social and therefore anathema to flâneurs. Facebook has been a major force in organizing online communities into incredibly valuable corporate assets.

However, some pockets of oddity remain for the cyberflâneur. In the latest issue of Triple Canopy David Auerbach trolls the discussion group site 4chan and other preserves of the seething nerd underclass. These sites offer their members total anonymity, exposing the id beneath the keyboards of discontented online hoards.

The growth of these anonymous spaces marks the first wide-scale collective gathering of those who are alienated, disaffected, voiceless, and just plain unsocialized. These are people whose tweets will not make the headlines. They do not wish to create a platform that enables them to be heard by the world; they want to shut out the world. Ironically, their popularity has exploded as part of the Web 2.0 boom, despite serving a fundamentally different purpose. The foundation of what I will call “A-culture,” as opposed to the culture of Facebook, Twitter, and other mainstream social-networking sites, is the intentional disconnect between one’s real life and one’s online persona (or, frequently, personae).

A-culture offers the shock experience (chockerlebnis, as Walter Benjamin called it) of cyberflâneurie. 4chan is a kind of Les Fleurs du mal for the Internet Age.

If you poke around the back alleys of the Internet you will still find sites with totally unexpected affinities and obsessions. You just have to let yourself follow the links sometimes. For example, just a few minutes ago a Tweet popped up on my timeline about the alleged assassination of North Korea’s Kim Jong-Un in, of all places, the North Korean embassy in Beijing. I clicked on a link in the Gawker story and found this blog dedicated solely to photographs of Kim Jong-Un looking at things. This photograph, posted on February 2, is captioned “looking at a gym floor.” 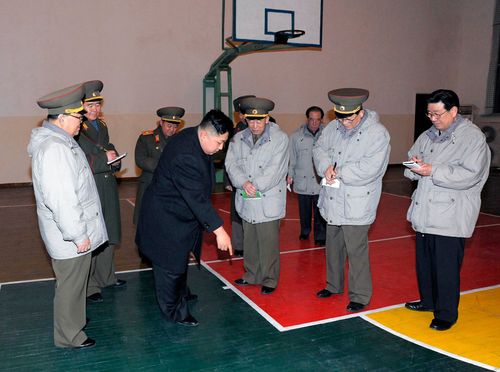 The blog is one of those one-joke memes that perpetuates itself much longer than you would expect, like the Twitter account purporting to be from a squirrel (Sample Tweet: “Blink. Stare. Blink. Rub top of head. Stare.”). “Kim jong-un looking at things” considers its subject–the Kim dynasty of weirdo despots–with a gaze at once avid and ironic, the perfect embodiment of the flâneur.

If I had to make a couple of recommendations for sites for your inner cyberflâneur, one would be UbuWeb, where you can find Robert Hughes’ brilliant Shock of the New series in its entirety, as well as sample films from the Lumière and Company project from 1995. The other site would be Coudal Partners’ Fresh Signals column, a list of website unified only by the demand that they be interesting.

PS: As of this writing (1:54 Central Time) neither Reuters nor A.P. has carried the news of Kim Jong-un’s death. You’ll know for sure he’s still alive if a photo of him appears on “kim jong-un looking at things.”