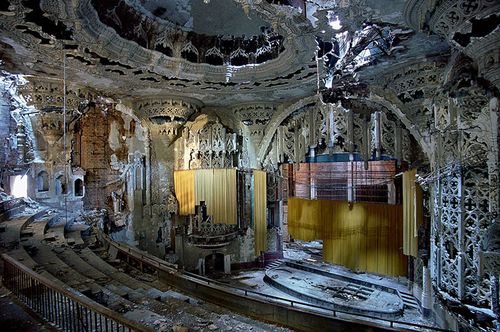 Rick Poyner pages through the latest issue of Icon magazine devoted to ruins. The issue introduction echoes Walter Benjamin’s remarks on ruins in the Arcades Project. The ruin of the Chernobyl power station in Ukraine, which the editors call “the number one goal of the intrepid urban explorer,”

represents the return of nature. We look at how nature and technology was held in balance by the iron and glass architecture of the 19th century (think Crystal Palace or Kew), and at how this tension is gestured at by contemporary architects who cover their high-tech buildings in greenery.

The curious thing about American disapproval of “aestheticized” pictures of ruins is that it seems ahistorical. Perhaps the US, as a younger country, is just less used to the presence and idea of ruins. Maybe ruins, as signs of thwarted hopes and failure, offend deeply against national positivity so that photographing them, appearing to enjoy what the pictures show, is felt to be in horrible bad taste. Hard to know: I don’t feel that way.

As Benjamin knew, ruins can teach us much about the unfulfilled collective dreams buried in the rubble. This is why, for Benjamin, progress is a form of forgetting; unresolved social conflicts reappear with all the mythic force of nature. Detroit is an allegory of what happens when labor is treated with contempt. A mighty manufacturing city arose to employ and enrich millions, becoming the mightiest economic engine in the United States. In less than a century it was gone.