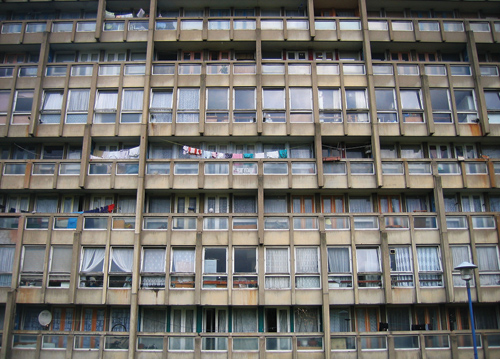 Owen Hatherley is barely in his thirties and already he’s on his second book of architectural criticism. That seems too young to be an architectural critic, although I can’t say exactly why. A young literary critic is acceptable, but architecture somehow needs age. (Which may be its problem.) In any case, Will Self reads both of Hatherley’s books, Militant Modernism (2009) and A Guide to the New Ruins of Great Britain (2011). Self isn’t sure what to make of Hatherley’s youth, either. He calls the critic’s freewheeling style a relief from conventional architectural criticism and “a necessary corrective to its supine state,” but Self suspects Hatherley is merely trying to be a Rem Koolhaas who listens to rock music, which is exactly what Rem Koolhaas would not do.

Self’s discussion of the current state of British architecture is loaded with Britishisms; from what I gather “Basingstoke” is a term meaning “aesthetically contemptable,” although it may also refer to a place where people live. (I suppose I should Google it.) One term meant for export is Hatherley’s “pseudomodernism,” which means a modernism that has lost its nerve. Hatherley loves béton brut, which is authentically modernist where you like it or not (I do). An example of pseudomodernism is Terry Farrell’s Home Office Building (above left), which Hatherley describes as a “combination of Weimar Republic curves and De Stijl patterns with eager-to-please colour – which here is provided, as per the Blairite fetish for the ‘creative industries’, by the artist Liam Gillick.” Self, by the way, seconds this opinion.

Self suggests “pseudomodernism” better translates as “junkspace,” Koolhaas’s term for 21st-century corporate architecture, with its grandiose buildings of “terminal hollowness” resting smugly in a “seamless patchwork of the permanently disjointed.” Hatherley’s critical vision isn’t as sublte as Koolhaas’s. What’s more, Hatherley trips up on a classic hipster’s dilemma: Is it cool to buy an album by an obscure German techno DJ from a suburban mall record store? As Self puts it, “The problem for Hatherley, as I see it, is that he cannot quite cope with the deep-seated – and philoprogenitive – nature of the masses’ bad taste.” In other words, pseudomodernism isn’t just a quality of buildings, but also of the people who inhabit them. This long after modernism, that’s a pseudomodernist attitude to have.