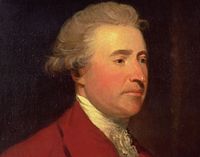 I don’t often read conservative publications other than an occasional David Brooks column, but Samuel Goldman has an interesting article in the American Conservative. It’s a review of Corey Robin’s new book  The Reactionary Mind: Conservatism From Edmund Burke to Sarah Palin. Goldman begins with a question even I wouldn’t ask out loud: Is it necessary to be stupid to be a conservative? People have been asking that question since the invention of conservatism in the 1790’s. Thomas Paine thought all conservatives were stupid, while John Stuart Mill asserted that not all conservatives are stupid, but stupid people were generally conservative.

Goldman denies conservative ideology (his term) is stupid (I would agree), but he does allow that it is reactionary, a remarkable term to use in a conservative publication. At any rate, his main point is that contemporary American conservatism has evolved into a difficult place from classical conservationism.

Conservatism originated in Edmund Burke’s Reflections on the Revolution in France (1790). Burke argued that the French Revolution was an historically new phenomenon, “the most astonishing thing that has hitherto happened in the world.” There had been violent mobs and uprisings before; what made the French Revolution unique was that it was driven by the Enlightenment idea of the absolutely free and self-sufficient subject. Burke was horrified by this idea. He assrted that people actually live in communities. People are social beings first, so they need a stable social order and hierarchy.

Modern American conservatives, on the other hand, have grafted the radically free subject onto the classical conservative social subject. The result is Ron Paul. This is why libertarianism has always been an uneasy fit within the Republican Party. Freed of the constraints of society, enforced by social conservatives, the conservative subject looks a cover for ruthless economic self-interest. Besides, as the Burkean conservative David Brooks likes to point out, there’s extensive evidence from the social science research indicating that people are, in fact, social beings.

Goldman skips over some of the knottier questions raised by Burke: Does the Republican Party rely on an elaborate bait and switch, promising social reforms while delivering tax cuts for the wealthy? Is the common ground between conservatives and liberals over the primacy of the social over the individual?