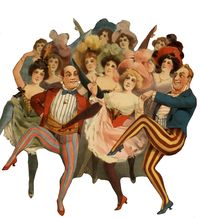 American Circus is a new online journal of cultural criticism. Its design hints  at an irreverent, even carnivalesque attitude, and the articles largely support that supposition. The journal’s specialty is a lone critic treading carefully through a major cultural event. Co-editor Mostafa Heddaya bravely wades into Art Basel armed with a disposable camera, which set his coolness account deep into the negative. He discovers an art fair of deplorable shallowness, full of poorly conceived stunts about art as a market staged by the stray poodles of the art world.

Similarly, Benjamin Riley happens upon an Edinburgh, Scotland pub called the Deaf Novelist. It’s noon, so he is greeted by a foul odor, a displeased bartender, and not much else. He is the only customer in the pub. Matters get worse when he returns during normal business hours (for a Scottish pub) and meets the regulars, cementing, for Riley, the Deaf Novelist’s claim as the worst pub in the city. “It wasn’t that it was that bad,” he writes. “More that it was just incredibly mediocre. Soul-crushingly banal, if you will.” I guess there wasn’t a filthy toilet he could dive into.

Co-editor Jamie Berk catches the journal n+1 at an awkward moment: the first summer of the Occupy Wall Street movement. An intellectual journal so hip it should be issued on a vinyl record, n+1 had an opportunity to recast the traditional liberal Democratic coalition of the college-educated bourgeoisie and lower-income voters. The Harvard-educated staffers of n+1 at least had the honesty to realize they might have more in common with the Harvard-educated plutocrats on Wall Street than they did with the people who cleaned Lloyd C. Blankfein‘s office. But as Berk points out, this realization compromised the journal’s ability to direct Occupy Wall Street’s energies beyond the streets of lower Manhattan.

Another skeptical take on one of the fixtures of the hipster establishment is John Vilanova’s essay on Bon Iver, who actually has released something on vinyl. Bon Iver is a bit of a high-wire act. Listening to frontman Justin Vernon’s lush music one waits for him to either fall into freak folk or become a sort of hemp Jim Morrison, a fame-starved rocker posing as an amplified Byron. Vilanova was a fan of the band until he began to suspect they may have been oversold. By the same token, too much can be made of the band regardless of one’s viewpoint. My guess is that Vernon will have Cat Stevens’ career, producing a modest string of hits until he slams into the limits of his mannerist style. Vilanova’s essay is really about the conundrum of the indie rock fan: When I listen to a song am I hearing the artist’s authenticity or my own naiveté?

For all his deeply personal reaction to his subject matter, Vilanova has done his homework, like all of all of the American Circus contributors. He knows the terms of the public debate and he places his own argument within it. The journal’s editors clearly want to cultivate distinctive personal style in its contributors while still remaining within the house style of thoughtful, informed irreverence. The style is harder to achieve than it looks, and it will be interesting to see if American Circus can maintain it.

The journal is in its fourth issue, and as good as it is, there’s room for evolution. American Circus is an online journal, but it looks like a print publication, lending the journal a serious air much like, well, n+1. Still, I’m pretty lazy when it comes to searching for videos. Can I have a Bon Iver performance video with my essay? Links can needlessly clutter up a page, but sometimes I follow them. Finally, criticism in the first person can be lively to read, sometimes it’s good to step back and allow the reader to form his or her own opinion. Framing an issue for further consideration by others is an equally valid function of criticism.

Jamie Berk and his staff have a lot of good ideas. They’ve already executed on one of them: bringing together disparate writing styles and critical points of view into a coherent and engaging format, unlike some other journals that read like a random collection of strangers shouting out opinions. Check back with American Circus to see what other good ideas they’ve put into practice.