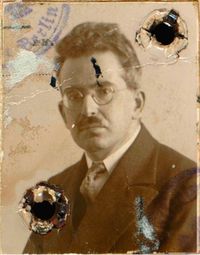 It’s been a while since I did a roundup of Walter Benjamin items on the web. Nearly every day somebody writes about him someplace.

Benjamin’s shadow over the contemporary preoccupation of theory with all things hauntological is fitting, particularly in the treatment of melancholy and history. From Zizek and Badiou, to Zero Books publications by Mark Fisher and Owen Hatherley, contemporary theory’s return to modernism has been marked by a self-conscious attempt to avoid the burden of melancholy affecting our relationship to the past, often characteristic of failed leftist projects.

. This isn’t the first novel about Benjamin. There’s been at least one other one: Jay Parini’s fine Benjamin’s Crossing

The Late Walter Benjamin is a documentary novel that juxtaposes the life and death of Walter Benjamin with the days, hours and minutes of a working-class council estate on the edge of London in post-war Austerity England. The novel centres on one particular tenant who claims to be Walter Benjamin, and only ever uses words written by Benjamin, apparently oblivious that the real Benjamin committed suicide 20 years earlier whilst fleeing the Nazis. Initially set in the sixties, the text slips back to the early years of the estate and to Benjamin’s last days, as he moves across Europe seeking ever-more desperately to escape the Third Reich.

The experimental art organization Mobius Art Group created a video series they call 100 Years:Occupy History (reading Walter Benjamin). Part one of the series appears below. Follow the link to see the rest.

The online art journal Burnaway has an expository essay by Alex Robins on Benjamin’s concept of aura. Robins provides several examples from contemporary art and culture. One example is the recent sale of John Wayne’s cowboy hat:

Two months ago, John Wayne’s cowboy hat from the movie Big Jake sold for $119,500 at auction. This price was higher than expected, but not terribly surprising considering how iconic John Wayne and his Westerns continue to be. But, celebrity aside, the whole transaction becomes strange: without Wayne the hat is just a hat. There is nothing unusual about its make or material that would warrant such a high price. Yet it is obvious that value of the hat is not in the material object itself. It is the immaterial aspects of celebrity and fandom that influence the perception of the hat. These perceived qualities attributed to the object are to be captured in the general formulation of aura.

And finally, a snapshot from the Jewish Museum in Paris of some notes by Walter Benjamin.