This has been a really busy week, so I’ve been in a virtual Internet blackout. Right after I finish this Fun Friday entry I’m going to look up the weather report from the new weather satellite launched by North Korea. I’ve been looking forward to it for a long time.

First up this week is a screening of Parallex Sounds at the Chicago International Movies and Music Festival (CIMMfest). As I’ve mentioned before, Parallex Sounds is a documentary on the post-rock scene in 1990s Chicago. The film is shot in director August Contento’s distinctive style, heavy on the horizontal movement, with a soundtrack by musicians including Ken Vandermark, Steve Albini, Wayne Montana, David Grubbs, John Herndon, and Rob Mazurek. A work-in-progress preview of Parallax Sounds takes place on Saturday, April 14 at 5:30 PM at the Wicker Park Arts Center in Chicago.

The 20th Congress for the New Urbanism takes place May 9-12 in West Palm Beach, Florida. This year’s Congress will focus on current problems (crappy housing market, rising seas, income disparity) and past legacies (Spanish and European urban planning for the New World). Early registration has passed, but it’s still possible to register for parts or all of the Congress. Schedule and registration info available on the CNU site. 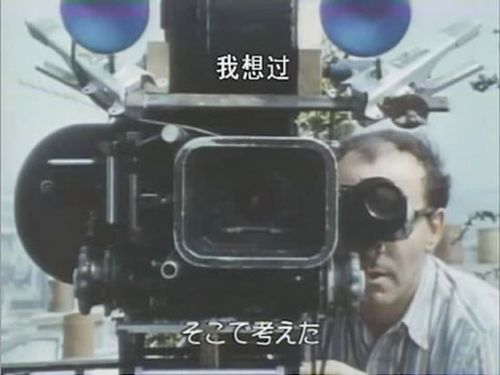 I’m currently reading Miriam Hansen’s Cinema and Experience: Siegfried Kracauer, Walter Benjamin, and Theodor W. Adorno, which has revived my own interest in considering how Walter Benjamin’s theories about cinema and photography can be updated to illuminate current cinematic practices. One interesting confluence of Benjamin’s philosophy and modernist cinema appears in Irmgard Emmelhainz’s multi-part essay “Between Objective Engagement and Engaged Cinema: Jean-Luc Godard’s “Militant Filmmaking” (1967-1974)” in the journal e-flux. Emmelhainz reports that French Maoists took their cue from Benjamin, which he probably would have regarded with much ambivilence.

Walter Benjamin’s critique of Lenin’s professional intellectual was influential in the French Sixties. For Benjamin, the problem with professional intellectuals is that when they attempt to integrate themselves into the proletariat, they ignore their own position in the process of production. Benjamin calls this the trap of logocracy, a system that implies the ruling power of words. In order to avoid this trap, Maoists prioritized practice (working alongside workers) and denigrated discourse, focusing their energies on liberating the forms and instruments of production (to achieve self-management) and promoting self-representation.

I’ll have more on Miriam Hansen’s terrific book when I finish it.