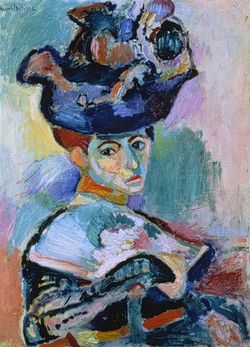 the more closely we examine the age of the avant-garde, the more confounding our discoveries become. Our cultural technocrats, with their surveys, polls, and pie charts, cannot seem to persuade anybody of anything, certainly when compared with the avant-garde generations who transformed the cultural imagination of Europe, America, and much of the rest of the world. And they managed all this even though many of them were eccentric, maladroit, belligerent, restless, conniving, insecure, pedantic, or downright unstable.

Neither Stein nor van Gogh were alone. Both had excellent brothers. In Stein’s case, her brother Leo helped her buy some of the early modernist paintings by Picasso and Matisse for which she’s now better known than her writings. (The Steins bought Matisse’s portrait of his wife, above, when the artist was still a relative unknown.) Van Gogh had his long-suffering brother Theo.

Leo and Theo were instrumental in connecting their siblings to a cultured bourgeoisie who were open, if not always eager, to consider new art forms. More than any other art form, painting appeals to the culturally ambitious. That’s why Stein is more admired today for her taste in interior design than her writing.

Perl doesn’t mention another function of the avant-garde besides expanding taste. The avant-garde also broke down the barriers between art institutions (museums, academies and the like) and other cultural practices. One famous example is the Armory Show of 1913, staged by an artists’ organization rather than a museum or gallery and housed in a US National Guard armory in New York. In other words, the avant-garde assaulted not only conventional taste, but also the institutions that perpetuated those tastes.