The term “regional architecture” was first coined in 1981 by Alexander Tzonis and Liane Lefaivre, but it was given its most famous elaboration in Kenneth Frampton‘s canonical essay on “Critical Regionalism” (1983). Americans discovered a taste for regional architecture at the same time they developed a taste for regional cooking. Both were concerned with protecting aesthetic instincts from instant and inescapable commodification–the Big Mac and the ubiquitous late 1970s McDonalds restaurant, only now being updated. Regional architecture was threaten by the forces of suburbanization: the housing development, the standalone office tower and the interstate highway system. By the early 1980s post-war suburbanization had given way to postmodernism, Frampton’s main enemy. Postmodernism was at once an acknowledgment of historicism (one of regionalism’s critical elements) and its sublation, elevating junk into a something rarefied and cool, like the $10 hamburger in a Manhattan restaurant. 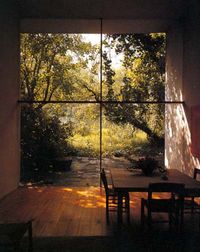 Initially, however, regionalist architecture resembled late modernism with its expensive materials and tactile pleasures, a last resistance to the transition from precious metals to credit cards. As Frampton put it, “Critical Regionalism depends upon maintaining a high level of critical self-consciousness. It may find its governing inspiration in such things as the range and quality of the local light, or in a tectonic derived from a peculiar structural mode, or in the topography of a given site.” Frampton lavishly praised the sensuous brick of Alvar Aalto and sleek wood and stone designs of Luis Barragán (at left).

Frampton’s embrace of modernism was the result of a desire to return to a universal civilization somehow embedded into the Aalto’s organic materials. As Frampton himself admitted, critical regionalism was more of a state of mind than a particular cultural practice. This attitude prompts questions about the geographical specificity of regional architecture. Is the American South a region? Are the bungalows of Chicago’s South Side a region? What about the historicist mansions of New York in the 1920s? 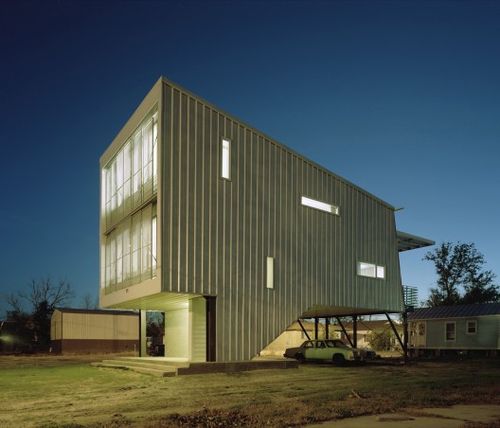 In any case, now regionalism has become Modernism in Unexpected Places. And like all construction in the 2010s, it requires a commitment to sustainability, even when the local populace couldn’t care less. Take, for example, the work of Marlon Blackwell, an architect based in Fayetteville, Arkansas. His Porchdog House (above), designed for a post-Katrina Gulf Coast, is aesthetically lean in a Supersize Me culture. The design juxtaposes slit windows with floor-to-ceiling expanses of glass, neither of which is indigenous to the Gulf Coast. The Porchdog House (there’s no porch, by the way) neatly invokes a solution from a pre-industrial period in which nature was still predictable to a situation in which weather has become monstrously unpredictable–in a place in which the politics of global warming are hotly contested. Even more important, the Porchdog House can be recycled, should the occasion ever arise, into something else. A shipping container, for example. Or an Orthodox church.

Reconsidering regionalism in 2012, as David D’Arcy urges us to do, can’t help but be fraught with anxieties, prompted by the Republican Party primaries, that regionalism has devolved into sectarianism. Regional architecture, like regional literature, refers to those spaces left behind by the global economy. Regionalism as a genre may exist primarily in the eyes of the beholder. It has a formal purity totally distinct from the lived experience of a particular locale. It can be reassuring, maybe even nostalgic, to allude to old-fashioned architectural forms in the United States when we’re confronted with strange, hybrid social formations such as the communist Chinese robber baron. Regional architecture reminds us that there once was such a thing as a region rather than a marketing demographic or a political special-interest group.