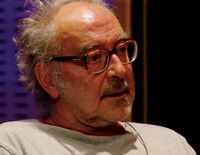 Jean-Luc Godard is shooting a film in 3D. I would have thought that he would be the last director to go 3D, considering his career-long critique of the lure of the image. However, he claims to be intrigued “when new techniques are introduced. Because it doesn’t have any rules yet.” Silent film had the same appeal for an earlier generation of French filmmakers, when it was still possible to experiment without being labeled experimental because the classical style hadn’t yet been codified.