It’s time to do another Walter Benjamin roundup, this time focusing on two of his works, the artwork essay (“The Work of Art in the Age of Mechanical Reproduction“) and Moscow Diary.

First up is Nikki Lusk’s extended commentary on the Google Art Project. She makes a point that Benjamin didn’t directly consider in the artwork essay, but is certainly accounted for in his observations on distraction.

The German cultural critic Walter Benjamin, in his 1936 essay ‘The Work of Art in the Age of Mechanical Reproduction’, argued that an original artwork emits a certain ‘aura’, a ‘unique existence at the place it happens to be’. But I’ve already chosen convenience over quality in other forms of media: MP3 versions of songs have an inferior sound quality to those produced as FLAC files – which you can buy from an increasing number of online music retailers, including Bandcamp – yet I prefer MP3s because they’re easier to corral and play through iTunes, which doesn’t accept the FLAC format. In many situations, I’d trade the aura of original artwork for the ability to keep it in my pocket. 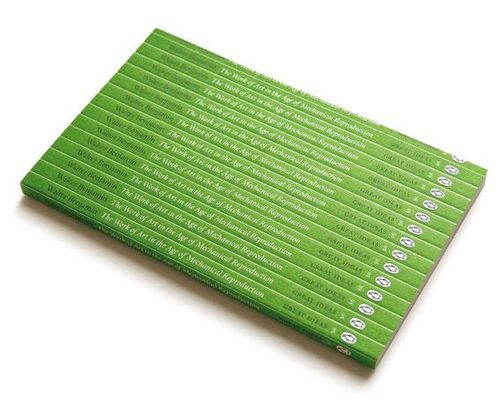 In another consideration of the artwork essay, Slate’s Michael Agresta notes how the Penguin UK edition of the artwork essay plays on the notion that the essay itself as a reproducable object. Agresta quotes a famous passage from the essay, ” [T]hat which withers in the age of mechanical reproduction is the aura of the work of art. By making many reproductions it substitutes a plurality of copies for a unique existence,” and adds,

Now, as we move into the digital age, the well-made copy has come to occupy a familiar, almost nostalgic middle ground between the aura of an original and the ghostly quality of a computer file. A mass-produced paper book, though bulkier and more expensive, may continue to be more desirable because it carries with it this material presence. And presence means something—or it can, at least, in the hands of a good book designer.

Moscow Diary is the closest Benjamin ever came to writing a novel. In the right hands, the diary would make an excellent fiction film. Adam Kossoff has made a documentary based on Walter Benjamin’s book. His version of Moscow Diary was screened at the Bedford International Film Festival. It sounds like a fascinating project: shot entirely on a cellphone, it situates Benjamin’s 1926 visit in contemporary Moscow. Alas, the actual film isn’t so fascinating, at least according to Matthew Lee. First of all, Kossoff doesn’t have Park Chan-Wook’s way with a mobile camera, nor his post-production resources. The drama of Benjamin’s ill-fated affair with Asja Lācis doesn’t come across in the low-fi images and shaky camera work. Lee concludes,

Forty-five minutes simply isn’t enough time to adequately explore such a multi-faceted area of discussion and although Kossoff does take a stab at focusing on just one narrative thread, he never really finds a way to convey much more with it than a kind of bloodless melancholy.

Lee has almost the exact same problem with another 45-minute film, Vladimir Léon’s Angels of Portbou, which also appeared at Bradford. Portbou is the Spanish border town in which Benjamin committed suicide in 1940. The perfect setting, in other words, for a romantic comedy. Evidently the hero is obsessed with Benjamin and he finds someone who’s turned on by that. Anway, Lee says “the movie is simply too much of a passing fancy, an amusing diversion that doesn’t really leave you that interested in seeing it again. The literary angle isn’t much more than a macguffin.” Talk about looking at the world in a distracted state.