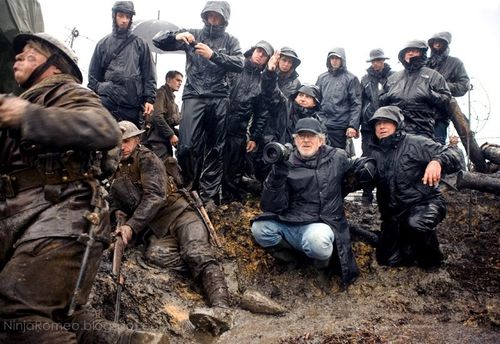 Cinema is a technology and therefore prone to being derailed by obsessives without any perspective. The controversy over Peter Jackon’s controversial proposal to shoot films at 48 frames per second, double the standard rate, would seem to be just another geeky squabble of little concern to movie lovers.

As David Bordwell points out, almost every technological innovation in cinema has expanded the director’s palette. During the 1950s, a period of intense technological innovation in the movies, a director was presented with the options to shoot in “black-and-white or color, deep-focus or soft-focus, with arc or incandescents, flat or anamorphic, and so on.” Jean-Luc Godard has picked up a 3D camera for the same reason. Martin Scorsese’s Hugo demonstrated that 3D was no longer reserved for big-budget action films.

However, 48 frames per second has tipped the balance between digital and analogue decisively in favor of the former because no analogue cameras shoot at that rate. If 48 fps becomes the standard, which is what Peter Jackson and James Cameron want, then all films will have to be converted to digital in post-production, regardless of how they were shot.

Furthermore, Bordwell claims, movies will become increasingly dependent upon special effects. They will become at once more fantastic and more immersive. The realist cinema of André Bazin and others, who argued film revealed something about phenomenal reality we couldn’t see ordinarily, will disappear.  The filmmaker’s palette will get smaller, not larger.

For realists like Bordwell, the new digital technologies threaten something essential about cinema. What is film without film? This is a serious question. However, there are two historical complications to Bordwell’s objection to the increased artifice of digital technologies. One is that the history of art is the story of some techniques falling by the wayside only to be replaced by others. No artist ever has unfettered access to the entire range of artistic techniques.

Another complication concerns the history of perception. Walter Benjamin argued in “The Work of Art in the Age of Mechanical Reproduction” that cinema, like photography, changed the way we saw the world around us. Reproductive technologies expanded perception because our reality consisted largely of reproduced images. “The equipment-free aspect of reality here has become the height of artifice,” he writes, “the sight of immediate reality has become an orchid in the land of technology.”

Bordwell worries that 48 frames per second is just the beginning. Sixty frames per second is around the corner, followed by more computational enhancements until the cinema becomes like the iPhone, something that can only be relentlessly improved or face obsolescence. He warns, “if cinema technology went wholly digital, it would change in fundamental ways. It would turn a medium into a platform, like a computer operating system. The most basic technology of showing a movie would become subject to rapid, radical, ceaseless remaking. It would demand versions, upgrades, patches, fixes, tweaks, and new software and hardware indefinitely.”

But isn’t constant upgrades a fact of life now? Aren’t they written into the very forms of perception?

Last year in Hollywood film was notable for its nostalgia. War Horse (still above, with director Stephen Spielberg in the center) was a throwback movie shot on film stock. Stylistically, it was a kind of orchid: beautiful, rare, and fleeting in its historical moment. It was pure naturalism. The Artist was another orchid, but a technological one. It lovingly recreated a way of looking, but stopped there, as if film technology never developed after 1927. Critics objected that the film did nothing else but recreate silent cinema technology. The role of special effects was filled by the dog.

Technology is now integral to how we see movies and how we perceive our environment. The cinema as a platform has already happened, an operating system that runs on a multiplicity of devices from theatrical projectors to iPhones. Technology is what distinguishes the cinema from television. Even when films are very good, like The Descendants, they can look like television if they repress their technological foundation or pretend that the foundation never changes. Movies are either up-to-date, obsolete, or they’re television.