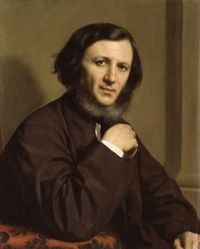 This year is the bicentennial of the births of the poet Robert Browning, familiar to every Into to Lit student in the US as the author of “My Last Duchess,” the most famous example of dramatic lyric poetry, and probably the most mocked. Less stuffy and more romantic than his rival Tennyson, Browning is now regarded as a somewhat anodyne figure, the kind of guy who kissed his mother every night before he went to bed, even into adulthood. It doesn’t help that unlike Dickens, also born in 1812, he evinced no reforming zeal in his life. He was an unreflective liberal, which in Victorian times meant exactly the opposite of what the term means today. In other words, he fit comfortably into the dominant ethos of his times.

Still, edginess and doubt surface occasionally in his poetry. In “Childe Roland to the Dark Tower Came” Browning expresses his belief that we can sustain transformative energy only in the pursuit of ethical goals and that the martial spirit of the British Empire destroyed everything it touched. As Robert McCrum points out, “A transgressive figure like Graham Greene used to quote Browning’s fascination with ‘the dangerous edge of things’ with approval. Perhaps it’s Browning’s combination of darkness and light that’s appealing to posterity.”

And he married well.