I’ve been thinking of ways to introduce more Benjaminian ways of representing events. For this week’s edition of Fun Friday I want to track the NATO summit from a particular point in downtown Chicago. This will be a constellation of different fragments–some experienced first hand, some linked from other online sources.

I’ll be updating this entry throughout the day. 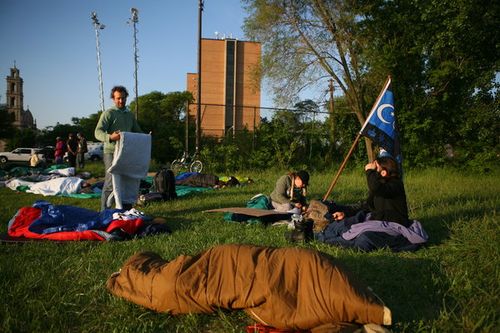 The first major demonstration of the NATO summit weekend descends on Daley Plaza today, promising to gather thousands of people protesting government economic policies they believe benefit wealthy corporate interests at the expense of working people around the planet.

Overheard, Wilmette Metra station: They have a perfectly nice headquarters in Brussels. Why don’t they use it?

Twitter woke up and ate a big ole bowl of crack today. Hilarious day on the 140.

At least two-thirds of the desks in my office are empty. That’s a lot, even for a Friday.

looks like 11pm on a Saturday on Division St… GLAD TO SEE EVERYONE “WORKING FROM HOME” TODAY. #NATO

-I don’t know whether or not I’ll be working from home on Monday.
-I’ll be in the office on Monday.
-Will the CTA be running?
-Yes, no problems.
-Then why is Metra having so many restrictions?
-Because Metra is crazy.

Any minute now the Chicago sky will be filled with F-16’s, a refueling tanker, helicopters and more #NATO

Originally the G8 Summit was also supposed to be held in Chicago just before the NATO summit. That would have brought out the hard-core protesters, like the ones in Seattle.

It’s a “Beautiful Day” to be Bono. As Facebook goes public, the U2 frontman could stand to make up to $1.5 billion off the widely anticipated IPO.

In the office, just before lunchtime:

-I’m leaving at 12:30. Just so you know.
-Are you going out protesting?
-I’m getting out of town. Not because of the summit. I’m just leaving.
-Watch out for the black helicopters.

A friend of mine took this shot from Daley Plaza, where the nurses are protesting. 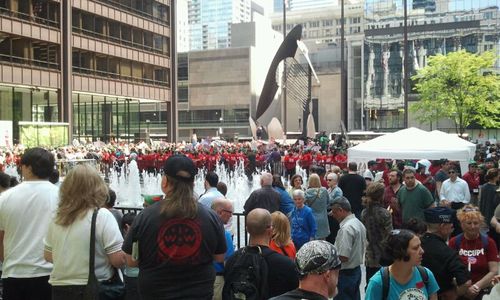 -I KNEW you’d be out there Mr Man! 🙂
-Only watching, not participating

I go outside at lunchtime

Over the outdoor speakers at the WGN Radio studio at the Tribune Tower, a commentator says, It’s not really a slider. It’s more of a slurve. But if he can throw it for strikes he can get you out.

Across the street at the Wrigley Building two Chicago policemen lean against a fence watching a man wearing a Union Jack vest and a top hat. He stands beside  a small table on which he’s placed a deck of cards, a stack of cups, and some bungee cords. What I need is a magical lady–just like you, ma’am! 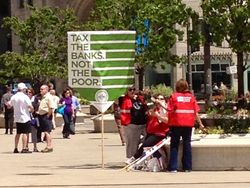 A few feet away are three protesters from National Nurses United, the same group protesting in Daley Plaza about half a mile away. One holds up a banner that reads, Tax the Banks Not the Poor. The other two protesters sit on a bench, eating McDonalds hamburgers.

Two men pass by. One says to the other, There’s a key next to the closet. Open up the closet and there’s something I want you to get for me.

A Coast Guard boat patrols the area between the bridges across Michigan Avenue and LaSalle Street, a machine gun mounted on the prow. As it passes near the Wendella Boat Tours dock a group of women wave. It says here it’s the water taxi, but I don’t think this is the one we want.

A security guard from the Trump building stands in a black suit, listening to something on his earpiece, sweating. 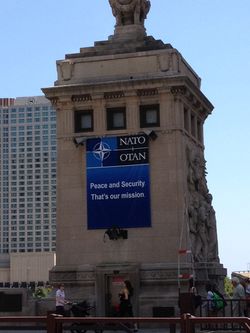 In Pioneer Plaza, opposite the Wrigley Building, six cops eye the crowd. Three cops have removed their caps. Five young women in blue sequin suits and yellow shoulder bags accoust strangers walking down Michigan Avenue. The yellow bags say NO SMOKE NO ODOR COSTS LESS. One passerby has his photo taken with one of the women.

It’s Cubs versus the White Sox on a beautiful day on the North Side of Chicago!

I think NATO is a stand-in for the true target of the protesters’ fury: the global economy and the G8.

Police estimated that between 2,400 to 2,800 people — many of them wearing red shorts and Robin Hood-style hats made of green felt — had gathered at Daley Plaza to support a so-called Robin Hood tax in financial institutions’ transactions in order to offset cuts in health care and social services.

My friend Tim reports from Daley Plaza: Watched a protestor filming a cop who turned and began filming the protestor.

Tim braces himself for the walk to the Green Line station: One of the women in our firm’s marketing dept said her friends had items thrown at them by the protestors in downtown Chi-town. Glad I’m wearing my magical Jeans of Non-Suity-ness as I head to the trains to go home.

1:25 p.m. | Updated Investors may have really wanted to like Facebook on its first day as a public company, but it appears many have changed their minds.

The first rally of the NATO protest weekend went off peacefully but groups of protesters conducted impromptu marches afterward on downtown streets that Chicago police tried to contain.

The two groups of protesters that had been marching through the Loop converged at Michigan Avenue shortly before 3 p.m.

Police, who had allowed the groups to wander through Loop streets largely unrestricted, stopped them halfway across the Michigan Avenue bridge, not allowing them to go further north. 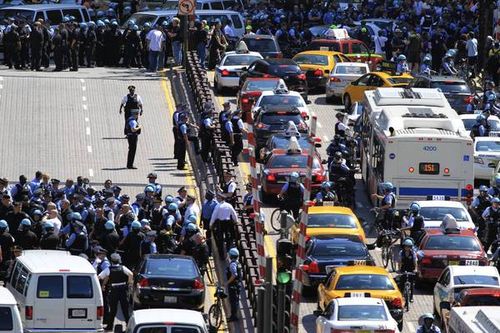 By coincidence I’m outside at 3:00 on the north end of the Michigan Avenue bridge, just below the frame of the photograph above. I’m on the phone making plans for Fun Friday at home with family and friends. About sixty Chicago police gather outside the Tribune Tower and the Wrigley Building. Tourists continue to mill about, take photos of the Jack Brickhouse memorial. A drunken Cub fan smoking a cigar stares into the street-level WGN Radion studio, which is empty. Overhead there are four helicopters circling over downtown. At least one has been in the air all afternoon. No protesters are visible here.

We make plans for cocktails in our suburban back yard with another couple. It’s going to be a beautiful evening.

Brewing drama at #noNATO march started b/c a protester tore down #NATO banner & cop went for his taser in response. Overreact much?

DHS staff told blogger they "expect the city to absolutely erupt in never before seen violence over the weekend": http://t.co/NzlZZPwt #NATO

Somewhere across the office a woman shouts, You can only have one bag on the train! That’s it.

Amid all the hoopla of the NATO summit, Kerry Wood picked this weekend to retire. He did so after striking out a batter. Other game highlights: Konerko was beaned and Sveum was ejected before the smallest City Series crowd ever.

On the far side of the office a woman says, My grandma’s like don’t wear a black shirt today. People will think you’re a protester. And I’m like Grandma that’s half my wardrobe.

My son called me up to ask about NATO. He’s thirteen and we live in the suburbs but he’s all interested. I said to him what are you going to do, spray paint the Diary Queen?