Whatever happened to Surrealism? Does anyone create Surrealist artworks anymore? The heyday of European Surrealism–Surrealism with a capital S–was brief and a long time ago. If you want some arbitrary dates, how about 1929, when Max Ernst conjured up The Master’s Bedroom, to 1931, when Alberto Giacometti, Salvador Dali, and André Breton published the last Surrealist manifestos in the periodical Le Surréalisme au service de la révolution. Even past its peak, however, Surrealism remained an important tool for critique. Rem Koolhaas’s Delirious New York, for example, was a Surrealist study of Manhattan’s collective unconscious expressed in the realities of the grid.

The digitization of culture, for all its benefits we currenlyt enjoy, has robbed us of the mystery and depth, the magical qualities of an unconscious that speaks through the object world. The relentless digitization of contemporary culture renders America’s damaged and broken industrial culture as a kind of analogue undead, not worthy of interest or meaning. As Walter Benjamin put it in his 1929 essay,  “Surrealism: The Last Snapshot of the European Intelligentsia,” the Surrealists were “the first to perceive the revolutionary energies in the ‘outmoded.'” The outmoded now gets recycled and re-fetishized as a deliberately anti-digital platform. Or it is ignored altogether. In neither case is the forgetten ever invested with transformative enegry. 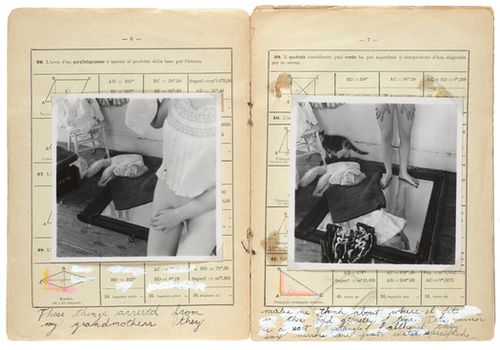 One sign that Surrealism really is dead is the Francesca Woodman exhibit at the Guggenheim in New York. Woodman came out of the Rhode Island School of Design, but she might as well have stepped out of a Louis Aragon novel. Already an artist with a developed aesthetic at 18, she found her material during a visit to Rome in 1977. By age 22, in 1981, she committed suicide.

Her slender body of work includes a book entitled Some Disordered Interior Geometries. Woodman overwrite a brief introduction to Euclidian geometry with handwritten notes and her own enigmatic photographs featuring fragments of her own naked body. Woodman invokes Surrealist photography’s oscillation between fragmentary parts and festishistic wholes, in which the female body appears simultaneously castrated and castrative.  The juxtaposition between the rational and the bodily is crude, as Surrealism can sometimes be, but Adam Harrison Levy reports the book has its own fascination.

The lure might come from the fact that the notebook is featured in the final room of the museum exhibition where Woodman is starting to explore new forms. Or perhaps it’s because the pages look frail and seem to demand special attention. But my suspicion is that people are drawn to Disordered Interior Geometries because of its form: they are drawn to it because it is notebook.

Peering so closely at the notebook of a woman barely out of college evinces a will to dreamwork, a conscious effort to re-enact dreams’ sudden collapse of distance. In her fragile book Woodman dramatizes, in the Surrealist manner, a changing relation to the object world. An insignificant thing from our our history, a geography textbook, suddenly emerges from the thicket of memory, then vanishes again under the weight of unresolved desire. Woodman offers a jolt of recognition of a familiar experience that has disappeared too soon, before we are ready to let it go. This is the work of Surrealism.

Today, these vanished experiences have no resistance. They can be summonded instantly from the data pool by Google, although in a form devoid of life.