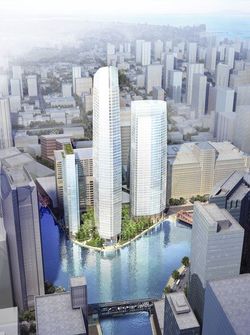 Blair Kamin reports on a proposal to build three high rises on Wolf Point in front of an ugly dog of a building housing a Holiday Inn and the Chicago Sun-Times. The proposal has been in some form of development since at least 2008, when reports first surfaced that Cesar Pelli had been hired to design an office tower on the site. The site is owned by the Kennedy family.

Two points of context about the proposal:

Another problem is the site. It’s historical–the city started in the immediate vicinity–and not exactly brimming with well-designed buildings, with the notable exception of Kohn Pedersen Fox’s 333 W, Wacker building. The site is a small spit of land that’s literally off the Chicago grid. It’s not easily accessible by car or on foot. You wouldn’t pass the site on your way to anywhere else. When there’s a major show going on at the Merchandise Mart, as many as 60,000 sharp-elbowed interior designers swarm the area. At those times the site is accessible by only swimming across the river. Even at the best of times the Wolf Point buildings won’t integrate well into the surrounding streetscape.