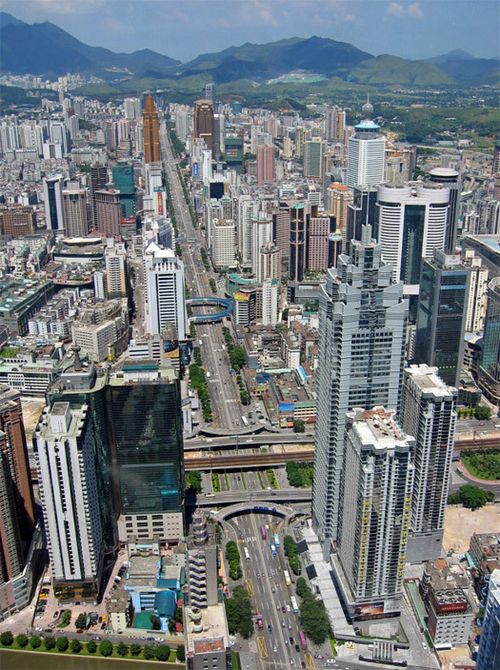 Keller Easterling examines a particularly opaque form of urbanism, the free trade zone. Definitions of the term vary a lot, but essentially a free trade zone is a pocket of laissez-faire capitalism within a nation state. Hong Kong is a classic of the type. If you’ve ever wondered how the Communist Party of China became the board of directors of China Industries, Inc., the answer is the free trade zone. The CPC created Special Economic Zones by casting a spell, transforming the oxen-and-cart materialism of Maoism into the phantasmagorias of late capitalism. The city of Shenzhen (top) is essentially one big SEZ. In slightly more than a quarter century, a lonely rural valley was transformed into a megacity with eight million inhabitants–plus 14 million transients. 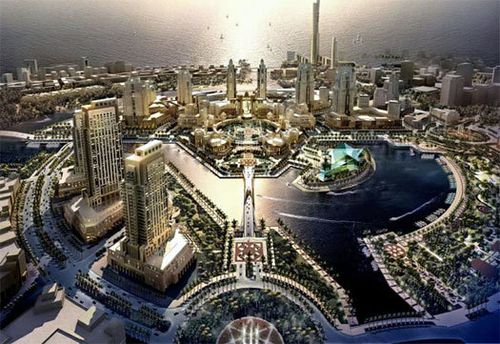 To make a free trade zone, all you need to do is demarcate a piece of territory, suspend all taxes and regulations, and introduce a breeding pair of entrepreneurs. Eventually your zone will develop extrastatecraft, Easterling’s term for a place governed by business interests operating more or less independently of local, national, and international law.  Easterling describes the King Abdullah Economic City (above), a new and especially fanciful example of extrastatecraft in Saudi Arabia, as “the embassy or parliament of the elite parastate corporation, the site of multinational and offshore headquartering and the spatial instrument for externalizing obstacles to profit.”

These zones usually generate a lot of profit for the companies hunkered down within them. However, like most forms of turbo capitalism, the wealth doesn’t trickle down much. Furthermore, instead of a zone of perpetual market dynamics, free trade zones morph into just another entrenched special interest bent on perpetuating itself. Free trade zones are sort of economic hot house flowers; the corporate and governmental structures set up to nourish the zone can’t readily survive integration into the larger economy.

Free trade zones sprout instant cities, but Easterling points out they are “a relatively dumb form of urban software” because they remain enclaves. A smart city enlightens the surrounding countryside. A free trade zone keeps its gaze on the horizon, waiting for the next planeload of consultants to arrive.