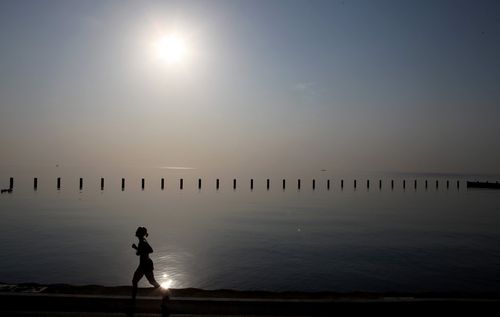 We’re having Wages of Fear weather in Chicago right now, so it’s hard to think of anything fun to do except diving into a pool. After three days of temperatures over 100 degrees you start to think something, somewhere, has gone awry and we’re starting to leave normalcy behind. Here are two examples of men who are showing us the way to the upcoming madness.

In the New York Times Sam Anderson announces, “There comes a time in the life span of every culture when it becomes necessary to think obsessively about LeBron James.” As hard as this is to admit, Anderson may be right. In Anderson’s view, James is the first truly dialectical athelete.

LeBron James has been a flying contradiction — a man whose every positive virtue contains its own negation. He is (according to the popular narrative) both lovable and odious, a ball hog and too deferential, incredibly clutch and a choke artist. He is Schrödinger’s superstar: simultaneously one of the very greatest players of all time and a fundamentally flawed squanderer of talent. If anything, his championship this year will not simplify this story. It only makes it more complex.

James isn’t a model sports hero, like Michael Jordan. he of the “impossibly coherent narrative.” Rather, James is a conundrum for our culture to solve.

One possibility is that James represents the end times for American sports, it’s dialectical development from elegant clarity to a proliferation of contradictions. It’s a train of thought Slavoj Žižek might pick up on–how James is absolutely peripheral to the culture yet somehow embodying its central contradictions. Maybe, if Žižek could focus on the topic long enough. 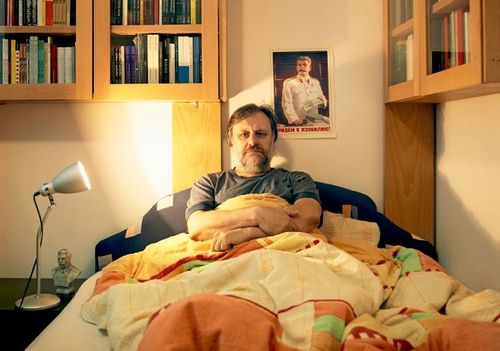 The talk of book reviews this summer is Slavoj Žižek’s Less Than Nothing: Hegel and the Shadow of Dialectical Materialism

. The book is supposed to be Žižek’s masterwork, his attempt to finally get out from under his image as the Borat of philosophy. Jonathan Rée’s review of Less Than Nothing is representative–and much like my own reaction to The Parallax View

Sad bookworms such as me, with rows of ragged volumes of Hegel and Marx on our shelves, will find plenty of well-made points in these pages, but many readers may find themselves lapsing into baffled torpor. Even if you are attracted by Žižek’s Hegelian fundamentalism, you are bound to wonder how it connects with his spectacular radicalism. After all it never led Hegel in that direction: he was notoriously timid about political change. And if we accept that there is no truth without error, we may well conclude that it is better to cling to the habits that were good enough for our ancestors than to stake the happiness of future generations on a gamble with incalculable stakes and uncertain prizes.

This is a far cry from the pleasures Žižek offered earlier in his career in Looking Awry: An Introduction to Jacques Lacan through Popular Culture

(1992) and Enjoy Your Symptom!: Jacques Lacan in Hollywood and Out

(1999) when he was more interested in a teaching a set of texts, particularly Hitchcock’s films. A brief and vivid view of Žižek can be found in this profile in which he veers wildly from the mortifying to the insightful. If philosophy has an id, it would be Slavoj Žižek.