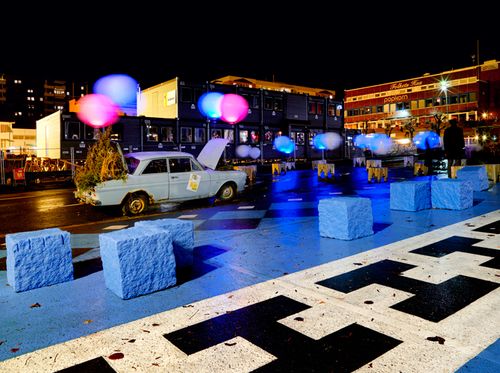 The summer issue of MAS Context is out with a spiffy new design and a topic that’s one of the most critical issues for architecture and design: Communication. Jody Brown’s brilliant blog Coffee with an Architect is essentially an extended riff on the problems of communication in architecture. Reading Brown’s blog and you will learn architects have huge vocabularies and endless problems explaining themselves.

The first function of communication is exemplified by the Tactical Urbanism project. Architects Ethel Baraona and Paco González function as facilitors for design workshops involving ordinary citizens. At work in Tactical Urbanism is the distinction between theoretical and practical discourse. The former is the realm of professionals (architects and urban planners, as well as city administrators, lawyers and so forth), while the latter is the realm in which norms are tested and refined. Baraona and González are trying to collapse the two realms into each other in order to forge “a connected society” which  “is able to take the city back.” It should be noted, however, that the really controversial decisions are made in the theoretical realm. It’s one thing to work out how many benches should be placed in a public square. It’s quite another to figure out how much money should be spent on benches.

Baraona and González believe the expressive, experiencial aspects of language can inform its abstract, cognitive aspects. Sam Jocobs takes a similar approach, but from the point of view of architects themselves. Jacobs urges architects to regard buildings as “a concentration of information assembled into built form.” Other forms of media–the cinema, for instance–offer representations from afar. One enters a building, inhabiting the representational realm itself. Yet, precisely because architecture is so concrete it’s easy to overlook its fictive quality. The Tribune Tower in Chicago is the headquarters of one of the largest media companies in the world, yet the building is blunt in its presentation of itself as a gothic cathedral, a style that was retrograde when it was designed in 1922. The relationship between the form of the building and its contents is utterly mystifying–unless mystification was, and still is, the intent. Jacobs, I think, would approve of the Tribune Tower precisely because it wears its fantasies on its sleeve, for ultimately

communicative architecture has only one potential subject: itself. Here, the fictions that bring it into would also be the narrative that it articulates. In doing this, architecture can exploit its own condition of being simultaneously fiction and non-fiction. In telling this us this story, it tells us the story of the world it is in the process of manufacturing.

Here we’re at the farthest extreme from Baraona and González’s populism: the essence of architecture can be seen clearly only by those who practice it, for they are the only ones capable of representing it clearly. When non-professionals enter into the discourse, buildings disintegrate into a proliferation of images, leaving architect and cartoonist Klaus (two occupations, one name) trying to discern the difference between architecture and its representations.

Are Robots of Brixton or Jonathan Gales’ breathtaking Megalomania architecture architectures-to-be, food for architectural thought? I don’t know. Is Zaha Hadid’s unbuilt Cardiff Opera House architecture? The plans for Le Corbusier’s Ospedale in Venice? A sketch by Alvar Aalto? It’s difficult to set the limit. At best, we could discuss in which order they line up, from “pure architecture” to its periphery. Ultimately, it doesn’t matter. Piranesi’s drawings are not, stricto sensu, architecture (some of his architectural fantasies couldn’t even be built three-dimensionally), even if they still represent (fictional) architecture. Manfredo Tafuri’s or Reyner Banham’s writings clearly aren’t. Yet, they are more valuable for architecture than many (most) built works.

In Klaus’s narrative of the triumph of the supplement over the essential, buildings themselves become blurry and threaten to disappear altogether. Michael Hirschbichler tells the same story, but in a more abstract way. For him building don’t vanish in the Internet babble; they are always embedded in larger processes of worldmaking. Starting from the great aesthetic philosopher Nelson Goodman and his theory of cognition as worldmaking, Hirschbichler introduces the concept of the notation, which is like a map of a territory. Notation, in effect, is the prep work necessary for altering an environment. “The notation is the medium through which the world must pass in order to be analyzed or altered,” Hirschbichler explains. The notation is the means by which reality enters language and, therefore, is the precondition for seeing and doing. A building never just sits on a patch of land. It exists in a landscape, a space delineated and elaborated by the mind and its tools.

Because my formal training is in literary and film studies, I engaged with three articles the most, but they’re by no means the only ones worth reading. The Communication issue was also especially pertinent because I’m also one of those non-professionals contributing to “the preeminence of commentary and opinion over analytic introspection” (Klaus) on the Internet. But aren’t professionals and amateurs alike inhabiting the same digital space, caught up in the same discussions? The Communication issue raises an essential question for relevant to anyone who is interested in design: What do we talk about when we talk about design?