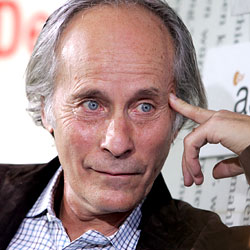 are in, and from the four or five reviews that I saw, these two points was made consistently: One: Canada is one of the best American novels of the year because of Ford’s prose. Two: The tone is haunting and heartbreaking without being cloying or sentimental.

I heartily agree with both points. Canada is carried by the quality of its writing. The novel is narrated by a sixty-five year old Dell Parsons whose parents robbed a bank in the summer before he was to enter high school. The first half of the novel, set in Montana in 1960, follows Dell’s parents’ unlikely transformation into felons. The second half of the novel takes place in Canada, where Dell contemplates the arrest of his parents and the disappearance of his twin sister.

The first half of the novel–the American side, if you will–is the better one. It reads like a crime thriller, albeit a slowly-paced one. Ford gives away his major plot element right away. We know Dell’s parents will rob a bank from the opening sentence of the novel. The suspense comes from watching Dell watching his parents, a retired Air Force officer and a teacher, formulate a plot to rob a bank. Dell struggles to understand why two ordinary people would decide to commit a crime. We struggle a bit, too, especially to understand why Neeva, his mother, agrees to be an accomplice. The tautness of the prose and the suspense as the plot unfolds carry us past the problems with motivation. Who knows, really, why anyone commits a crime? Dostoevsky and Camus both knew better than to explain criminal behavior too thoroughly.

After his parents are arrest, Dell is sent to live with a strange cast of characters in Saskatchewan. To Americans, Canada is a vague place, neither foreign nor domestic. In Dell’s eyes Canada is a spooky landscape waiting to be re-enchanted, a place where the effects of civilization are ebbing away. He had grown up with a family that had felt itself alienated from Western American society. In Saskatchewan Dell must find his way in a society with seemingly no connective tissue at all.  Before his parents’ arrest Dell had been plotting out his life like a chess game. In Canada he’s stuck in a ghost town. He goes from a plotter to an observer; his life story changes from a conventional narrative arch into a transformative interlude in which suspension becomes a mode of being.

Dell’s experience in the weeks leading up to his parents’ crime is repeated in Saskatchewan. Once again an unlikely person commits a terrible crime–this time, a murder. The buildup-payoff formula doesn’t work as well the second time around because of the bleak hopelessness of Dell’s time in Canada. In effect Dell re-experiences the trauma of his parents’ crime, their awful revelation of their own helplessness.

The vision in Canada isn’t tragic so much as traumatic. Tragedy can be dramatized, but trauma never enters language.  Ford’s novel, like Hemingway’s The Sun Also Rises, is structured by trauma without depicting it directly. The result is a flattening out of language and vision. Dell concludes his story with this curious statement:

I believe in what you see being most of what there is, as I’ve taught my students, and that life’s passed along to us empty. So, while significance weigh heavy, that’s the most it does. Hidden meaning is all but absent. The interlude is the life.

All Dell can do is “connect the unequal things into a whole that preserves the good,” which is pretty much all Hemingway’s prose does. For both Ford and Hemingway the actions of life have gravity but no meaning. Characters are trapped by the pull of gravitational fields. Neither Dell nor Hemingway’s Jake can change. Dell never develops beyond his thwarted plans for high school. He never leaves Canada, constrained by absence.