Jennifer Schuessler of the New York Times asks, “Can art still shock today?” The answer: yes, if you count a sub-artistic video on YouTube that provoked murderous rampages throughout the Middle East.

In 1913, the answer was also yes, but in a very different way. That year saw two huge public controversies over art: Stravinsky’s The Rite of Spring and the New York Armory show, which featured Duchamp’s Nude Descending a Staircase.

Ninety-nine years later, it’s easy enough to get a mob stirred up in Cairo, but it’s a lot harder to scandalize the Western bourgeoisie. Nudity and coarse language appear on cable TV. Controversies over obscene art last appeared in the late 1980s and early 1990s, with Robert Mapplethorpe‘s 1989 exhibit and Karen Finley’s publicly-funded provocations. Modernism long ago wiped out the differences between high and low art. Now the sadomasochism of 50 Shades of Gray is gobbled up by housewives.

Schuessler suggests the theater may be the last refuge of shock because of their immediacy. Thomas Bradshaw’s Mary, about a white Southern couple who keep a slave, was widely criticized when it debuted last year. Playwright Adam Rapp says the “dangerous moments” he puts on stage are meant to shock audiences into seeing reality more clearly. Drama is perfect for dispelling illusions because “it can be incredibly powerful to see something real, to have things feel like they are really happening.”

The belief that the theater becomes political by calling attention to its immediate presence in the real is straight out of Bertolt Brecht’s Verfremdungeffekt. Walter Benjamin referred to Brecht’s theater of defamiliarization as epic theater, which, according to Benjamin, “is less concerned with filling the public with feelings, even seditious ones, than with alienating it in an enduring manner, through thinking, from the conditions in which it lives.”

There’s no such thing as an epic theater in Benjamin’s sense any more. It’s not simply that audiences have become familiar with Brechtian defamiliarization techniques or that they’ve grown inured to nudity and foul language. Rather, in contemporary culture shock can be easily commodified by turning it into something an audience wants to hear, however uncomfortable it may be for a few moments. The Goodman Theater audience for Mary may have squirmed at the sight of a slave on stage, but the owners were white Southerners, not Chicagoans. White Southerners may be racists, the thinking goes, but not Chicagoans who voted for Obama. 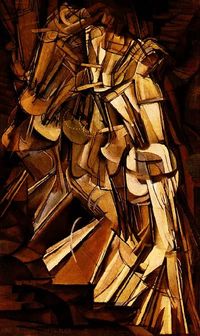 Stravinsky’s The Rite of Spring, on the other hand, made no political statements. It identified no social problems. Yet it continues to reverberate through Western culture because it completely confounded its audiences’ expectations about what it wanted to hear. There was no safe place from which one could consume a work of high art. And once it was out in the public sphere, the ballet was impossible to ignore. Similarly, Nude Descending a Staircase demanded to be looked at because of the visual experience locked up within it and not because of the nudity in the painting, which isn’t really discernable. Even though Rite and Nude were far away from real life and the political issues of their times, they were more shocking because they couldn’t be deflected or ignored.

Art can still shock audiences today, but only if it resists easy commodification and consumption–in other words, only if it subbornly remains an art object and nothing more or less.