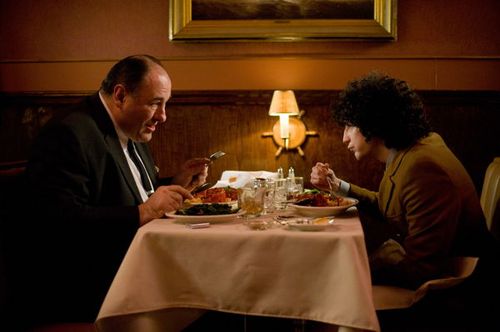 David Chase, the creator of The Sopranos, has made a movie. According to Salon’s Andrew O’Hehir, Chase would have been better off spending his time, say, repainting his living room. There’s no way Not Fade Away (still above) will have the cultural impact of The Sopranos because, O’Hehir says, no one really cares about movies anymore.

On the eve of the start of the New York Film Festival, O’Hehir declares,

Film culture, at least in the sense people once used that phrase, is dead or dying. Back in what we might call the Susan Sontag era, discussion and debate about movies was often perceived as the icy-cool cutting edge of American intellectual life. Today it’s a moribund and desiccated leftover that’s been cut off from ordinary life, from the mainstream of pop culture and even from what remains of highbrow or intellectual culture. While this becomes most obvious when discussing an overtly elitist phenomenon like the NYFF, it’s also true on a bigger scale. Here are the last four best-picture winners at the Oscars: “The Artist,” “The King’s Speech,” “The Hurt Locker,” “Slumdog Millionaire.” How much time have you spent, cumulatively, talking about those movies with your friends?

O’Hehir’s claim about film culture is not new, although he does a better job of saying what film culture is now–mostly celebrity gossip and deal analysis. However, film culture has changed since the Susan Sontag era because film’s place in upper reaches of the cultural hierarchy is now secure. Sontag wrote during a period when the boundary between high and popular culture was under contentious debate. The cinema was one topic in that broader cultural debate. Outside of a small international coterie of film buffs, few people in 1962 considered films of any kind an art form on par with opera or painting. Now the NYFF is hosted at the Lincoln Center. Like literature, movies are respectable enough to have people actively avoid seeing the best examples of them.

Unlike in Sontag’s day, when the cinema was part of a larger reconsideration of cultural value, discussion and debate about film has refocused on questions unique to film. The dominant topic of discussion about contemporary cinema is the the nature of film in the digital age. The stakes of the debate are actually higher now than they were in the 1960s. It’s simply that the questions are relevant to cinema by itself.

As for the comparison between cable television drama and international cinema, of course more people will talk about Breaking Bad than Song Fang’s film Memories Look at Me. The audience for the former already exists, while the audience for the latter needs to be created. The AMC series enjoys vastly superior advantages in distribution, publicity, and production budget. Fang’s film has to compete with thousands of international films for theatrical and DVD distribution, not to mention critical attention. Breaking Bad has been carefully placed in television’s one percent. In its time slot it has to not fail. Its audience is already there, waiting for it.