The 2012 presidential election seems like a very unartistic election. Romney is completely artless, although he is a fabricator of the first order. Unlike in 2008, no arresting imagery has emerged from Obama’s campaign this year.

Another problem is art in politics. Jonathan Horowitz’s well-meaning but conceptually thin instillation Your Land/My Land illustrates the partisan divide stripped of passions, rhetoric, or interest. The exhibit has been staged in seven contemporary art museums on either side of the red/blue divide, so Horowitz probably had to keep the instillations as anodyne as a high school civics class. The exhibit presumes that American politics is almost exclusively a mass media affair, which should be the starting point for the artwork, not its end point. 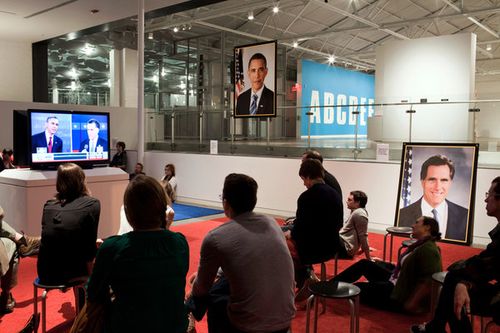 To be fair, Horowitz ‘s task is a daunting one. First, he hasn’t figured out how to critique partisanship from the outside–without appearing partisan himself. No one knows how to do that. Second, contemporary art museums should be the political of all museums, but they’ve been sandblasted into timidity by the right. Finally, as Randy Kennedy points out, American museums have traditionally “museums in America developed in tandem with the civic growth of the country [. . . ] Because of this, there has always been an expectation that museums, as educators more than anything else, must remain above, even far above, the fray.”

The key problem, to my mind, is assuming that the political occurs in one place, like television. This assumption only reinforces the false divide between people who act and people who are acted upon–the difference between makers and takers, if you want an even more pernicious way to state it. A good starting point for a political art that fits within the American civic tradition is to use art’s power of mimesis, of imitation, to make public what is private. The artist should make public both what is common to the community and what keeps us stuck in place, isolated from shared practices. In other words, the artist should reveal how we ended up getting stuck on the red or the blue rug, staring at a television.