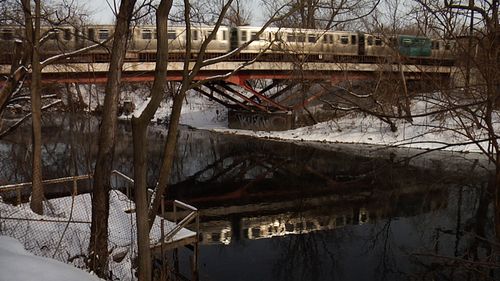 Augusto Contento’s Parallax Sounds is unlike any music documentary you’ve ever seen–and unlike any documentary you’ve ever seen. The film looks back on the post-rock music scene in 1990s Chicago, intercutting interviews with musicians with a Walter Ruttmann-style urban image montage. Contento, who co-directed and co-wrote the screenplay with Kênya Zanatta and co-produced with Giancarlo Grande, focuses on five key musicians: Steve Albini, David Grubbs, Damon Locks, Ken Vandermark, and Ian Williams. The interviews are filmed in Contento’s trademark tracking shots. Most often the subjects appear on a water taxi chugging back and forth on the Chicago River. The musicians emerge as distinct characters, each with their own story. Although all of them are still working musicians, they seem a bit forlorn, a little lonely now that the scene is largely dead. (In fact, more musicians were originally scheduled to take part, but they had left Chicago long ago.) Only Vandermark seems still energized by his work. He’s definitely the star of the film, his intensity cutting across Contento’s languorous visual style.

The purpose of Parallax Sounds is not to recreate the local music scene of the 1990s as if one were there. Contento was a big fan of Chicago post-rock, which he heard as a young man in Italy. He’s recreated that experience–listening to the music from afar and imaging the city that produced it. No peripheral figures appear in the film: no journalists who covered the scene, no one from Thrill Jockey Records, no fans. Despite its bustling air, the film has a solitary feel to it.

If Contento is uninterested in creating a conventional documentary, he really captured visual experience of the city, particularly the downtown area and lake front. The movie begins in deep winter–the frozen lake shore is chilling, literally–and ends in high summer when the city really opens up.

Contento seems to thaw himself. His Strade d’Acqua (Roads of Water, 2009) consisted almost entirely in long tracking shots, mostly of a boat traveling on the Amazon River. In Parallax Sounds he uses the same basic technique–he must have bought a monthly pass to the Chicago Water Taxi–but with greater attention to composing within the frame. At times he approaches the abstractions of Ruttmann and Alberto Cavalcanti in Rien que les heures (1926), but warmer than the former and less playful than the latter.

If you’re looking for a film that captures the post-rock scene of the 1990s as it once happened, then you’ll be disappointed. Instead, Parallax Sounds traces the music’s coming into being, its origins in the city itself. The film is a way of listening.