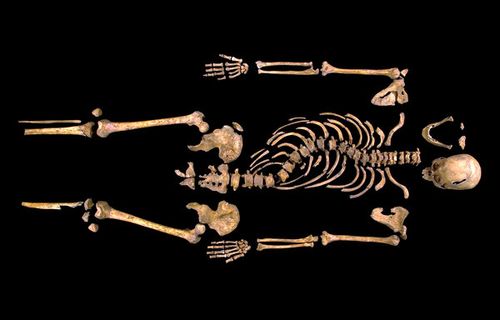 So we finally know what happened to Richard III. After he lost the Battle of Bosworth Field, he was stripped of his armor, beaten, then buried under a parking lot. According to tradition, this was exactly as he deserved. History, as the Tudors came to write it anyway, saw him as a high-strung, shrill agent of evil from birth until death. It was recorded by Thomas More, England’s most illustrious humanist, that his birth had been a difficult one. Richard emerged from his mother, the Duchess of York, baring teeth. He seemed ready for battle from his first moment of existence. As it turned out, he was the last English king to die in battle–that’s 528 years without losing a monarch on the battlefield, an impressive achievement, all things considered.

Early reviews of his reign weren’t positive. Shakespeare dismissed him as “That bottled spider, that foul bunch-backed toad.” The skeleton unearthed in Leicester confirms Richard had a crooked back. Shakespeare knew that long ago. Richard was “Deformed, unfinished, sent before my time / Into this breathing world scarce half made up.” Monstrous in form and ambition, even Shakespeare grants him some appeal. In Richard III the hunchback king  won over Lady Anne, despite murdering her husband and father-in-law.

However, as Walter Benjamin remarked in “Frank Kafka,” “unfinished” creatures have one foot in nature, the other in culture. They are harbingers of mythic violence–myth being Benjamin’s loose term for natural history. Richard III’s death ended the War of the Roses, but it did not end the violence surrounding royal succession. The Tudors were hardly peaceable people and much blood was shed in their dynastic squabbles. Richard’s antagonist Thomas More was beheaded by Henry VIII, who didn’t stop there. The War of the Roses was a playground spat compared to the Reformation and Counter-Reformation of the seventeenth century.